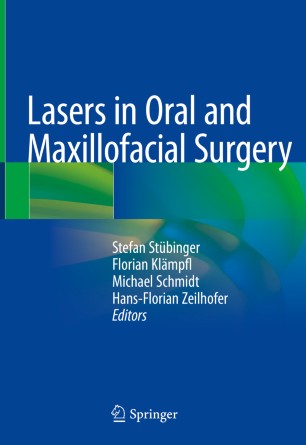 Lasers in Oral and Maxillofacial Surgery

This book provides surgeons with important insights into laser technologies as well as a sound understanding of their current and potential applications within oral and maxillofacial surgery and related disciplines. The opening chapters focus on the relevant physical background, the technology of the typically used lasers, laser–tissue interactions, and the treatment systems. Detailed information is then provided on the various established applications of laser treatments, including in relation to skin and mucosa and the dental hard tissues and bone. Special applications are also described, for example with respect to periodontal surgery, peri-implantitis therapy, photodynamic treatment, holography and additive manufacturing. The book closes by examining technologies that will soon be available for application in hospitals, topics which are currently the subject of research, and laser safety. Beyond surgeons, the book will be of value for engineers and scientists working in the field of medical engineering using lasers.

Stefan Stübinger, PD Dr. med. dent., is a member of the Hightech Research Center of Cranio-maxillofacial Surgery, Basle, Switzerland. Prior to taking up this position in 2015, he was a member of the Competence Center for Applied Biotechnology and Molecular Medicine (CABMM), Cranio-Maxillofacial Surgery and Implantology Group, University of Zurich, where he was group leader of the Cranio-Maxillofacial Surgery and Implantology Group. He worked as Senior Assistant Surgeon in the Department for Oral, Cranio-maxillofacial, and Facial Plastic Surgery, Medical Center of Goethe University Frankfurt, Germany. He was awarded his Habilitation in 2012 and is co-founder of several MedTech start-up companies.

Michael Schmidt, Prof. Dr.-Ing., has been managing director at Bayerisches Laserzentrum GmbH, Erlangen, Germany since 2005. In 2009 he was appointed Ordinarius at the Institute of Photonic Technologies, Friedrich-Alexander University Erlangen-Nürnberg. Furthermore, he is president of the German Scientific Laser Society (WLT).  Prof. Schmidt is a member of the Board of Directors of the Laser Institute of America (LIA) and vice chairman of the STC-E of the CIRP. He has been involved in major international projects, e. g. with Kazan University, Russia and Institute National d’Optique, Québec, Canada, and has served on the organizing committees of various leading international conferences. He is editor of several international journals.

Hans Florian Zeilhofer, Prof. Dr. med., Dr. med. dent., Dr. h.c., is Head of the Department of Oral and Maxillofacial Surgery at University Hospital Basel and head physician for oral and maxillofacial surgery at Kantonsspital Aarau. Dr. Zeilhofer was appointed Professor of Maxillofacial Surgery at the Medical School of the University of Basel in 2002. From 2008 to 2012 he was interim leader of the Department of Orthodontics and Pediatric Dentistry at the University of Basel. From 2007 to 2015 Dr. Zeilhofer served as President of the Swiss Society of Oral and Maxillofacial Surgery (SGMKG). He is a founding member of the Swiss Institute for Computer-Assisted Surgery has been involved in various MedTech start-up companies. He is the recipient of a number of honors and awards.