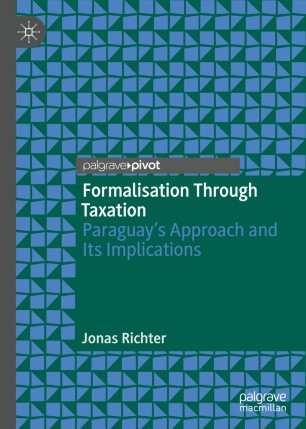 Paraguay’s Approach and Its Implications

In developing countries, such as Paraguay, informality remains a prevalent and persistent issue. Many avoid formal registration with the authorities and evade tax payments. However, a growing academic literature argues for an interrelation between a broader tax base and a country’s economic and democratic development. A strand of this literature focuses on the means of taxing the informal sector and argues for positive revenue and growth effects. This Palgrave Pivot analyses Paraguay’s 2004 and 2012 tax reforms using both qualitative and quantitative data. It illustrates that the country’s personal income tax, as well as other alterations in the tax system, constitute an incentive and nudging mechanism that leads to a formalisation process of economic activity, and consequently to a broader tax base. Using interview and tax data, the book demonstrates how the reform initiates a rising demand of formalised purchases from both customers and businesses. It further suggests a potential way of how the taxpayers respond politically to the enhanced fiscal imperative.