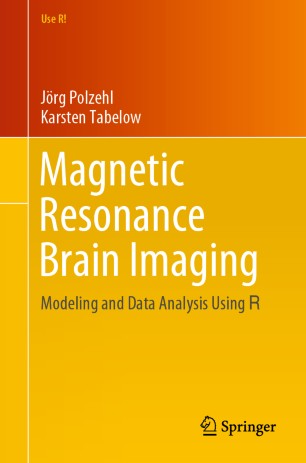 This book discusses the modeling and analysis of magnetic resonance imaging (MRI) data acquired from the human brain. The data processing pipelines described rely on R. The book is intended for readers from two communities: Statisticians who are interested in neuroimaging and looking for an introduction to the acquired data and typical scientific problems in the field; and neuroimaging students wanting to learn about the statistical modeling and analysis of MRI data. Offering a practical introduction to the field, the book focuses on those problems in data analysis for which implementations within R are available. It also includes fully worked examples and as such serves as a tutorial on MRI analysis with R, from which the readers can derive their own data processing scripts.
The book starts with a short introduction to MRI and then examines the process of reading and writing common neuroimaging data formats to and from the R session. The main chapters cover three common MR imaging modalities and their data modeling and analysis problems: functional MRI, diffusion MRI, and Multi-Parameter Mapping. The book concludes with extended appendices providing details of the non-parametric statistics used and the resources for R and MRI data.The book also addresses the issues of reproducibility and topics like data organization and description, as well as open data and open science. It relies solely on a dynamic report generation with knitr and uses neuroimaging data publicly available in data repositories. The PDF was created executing the R code in the chunks and then running LaTeX, which means that almost all figures, numbers, and results were generated while producing the PDF from the sources.

Jörg Polzehl is a research associate at the Weierstrass Institute for Applied Analysis and Stochastics (WIAS) in Berlin, Germany. He holds a PhD in Mathematics from Humboldt University Berlin. His main research interests include computational and nonparametric statistics, with a focus on statistical modeling and data analysis in medical imaging. He has been elected as a Fellow of the Institute of Mathematical Statistics (IMS) and is a member of the American Statistical Association (ASA) and the Organization of Human Brain Mapping (OHBM).

Karsten Tabelow is a (particle) physisist by training who currently works as a data scientist at the Weierstrass Institute for Applied Analysis and Stochastics (WIAS) in Berlin, Germany. His interests include magnetic resonance imaging data from the human brain, and data modeling and analysis problems with a focus on structural adaptive smoothing methods and biophysical models. He is also interested in reconstruction problems from physics-based imaging modalities. Lastly, he contributes to the discussions on open science and research data handling, especially within mathematics. He is a member of the OHBM.

Both authors have jointly coauthored several R packages for the analysis of magnetic resonance imaging data.

“This book is an excellent addition to the body of knowledge that can be of immediate benefit to everybody studying this area and interested in acquiring a hands-on experience in the specialized data analysis of image data.” (Witold Pedrycz, zbMATH 1436.92002, 2020)