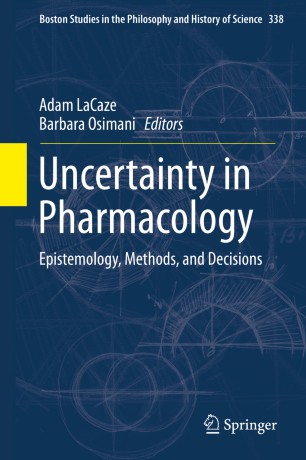 Part of the Boston Studies in the Philosophy and History of Science book series (BSPS, volume 338)

This volume covers a wide range of topics concerning methodological, epistemological, and regulatory-ethical issues around pharmacology. The book focuses in particular on the diverse sources of uncertainty, the different kinds of uncertainty that there are, and the diverse ways in which these uncertainties are (or could be) addressed. Compared with the more basic sciences, such as chemistry or biology, pharmacology works across diverse observable levels of reality: although the first step in the causal chain leading to the therapeutic outcome takes place at the biochemical level, the end-effect is a clinically observable result—which is influenced not only by biological actions, but also psychological and social phenomena. Issues of causality and evidence must be treated with these specific aspects in mind. In covering these issues, the book opens up a common domain of investigation which intersects the deeply intertwined dimensions of pharmacological research, pharmaceutical regulation and the related economic environment. The book is a collective endeavour with in-depth contributions from experts in pharmacology, philosophy of medicine, statistics, scientific methodology, formal and social epistemology, working in constant dialogue across disciplinary boundaries.

Prof. Barbara Osimani is Associate Professor of Logic and Philosophy of Science at the Polytechnic University of the Marche and is currently heading an ERC project, which also runs at the Munich Center for Mathematical Philosophy, LMU: "Philosophy of Pharmacology: Safety, Statistical Standards, and Evidence Amalgamation".

She is interested in scientific inference in research contexts characterised by strategic behaviour and she is developing a "Formal Epistemology of Medicine" in order to analyse issues arising in medical research, with a special focus on the complex interaction of methodological, social and regulatory as well as ethical dimensions in medicine. She worked on the precautionary principle, evidence hierarchies, causal assessment of pharmaceutical harm, and statistical inference. Her recent papers analyse issues around philosophy of evidence (reliability, bias, reproducibility, coherence) from a Bayesian perspective. Within her ERC project: "Philosophy of Pharmacology: Safety, Statistical Standards, and Evidence Amalgamation" she developed a Bayesian framework for the integration of heterogenous items of evidence for the purpose of causal assessment of drug-induced harm ("E-Synthesis")

“Experts and students in pharmaceutical sciences, philosophy of science or medicine, epistemology, and clinical pharmacology will find this volume particularly interesting, for it elucidates many questions emerging from the intersection of pharmacology and applied philosophy. … this is a high-quality volume that raises intellectually stimulating arguments pertinent to pharmaceutical sciences as well as clinical practice.” (Maximillian H Stevenson, Doody's Book Reviews, November 6, 2020)