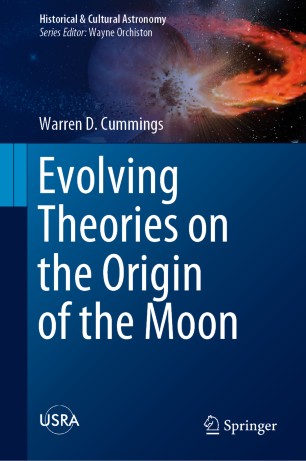 Evolving Theories on the Origin of the Moon

This book follows the development of research on the origin of the Moon from the late
18th century to the present. By gathering together the major texts, papers, and events of
the time, it provides a thorough chronicle of the paradigmatic shift in planetary science
that arose from the notion that the Earth-Moon system was formed from two
colliding planetary bodies.
The book covers pre-Apollo ideas, the conceptual evolution during and subsequent to the
Apollo explorations of the Moon, and the development of the Earth-Moon system consensus.
A plethora of excerpts from key publications are included to demonstrate the shift in scientific
focus over the centuries.
Through its comprehensive review of lunar science research and literature, this book shows how new technologies and discoveries catalyzed the community and revolutionized our understanding of the Moon’s formation.