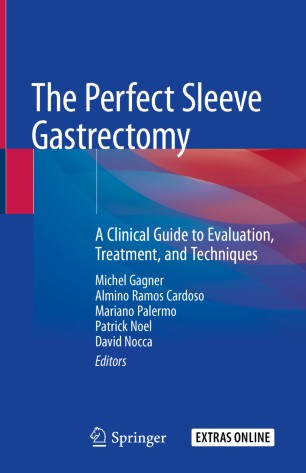 A Clinical Guide to Evaluation, Treatment, and Techniques

Sleeve gastrectomy (SG) is the most common bariatric procedure, accounting for more than 55% of all such surgeries performed worldwide.

Obesity has become a major global problem that continues to spread in both developed and developing countries. While prevention of obesity is the best approach for the future, the current challenge is managing those who are already obese or morbidly obese, who constitute close to two thirds of the population in many countries, such as the US. Today, bariatric surgery is the only evidence-based treatment for morbid obesity with a low complication rate and acceptable results in the long-term for both weight loss and resolution of comorbidities.

This book details all the approaches used in sleeve gastrectomy (SG), offering readers the tools needed to perform the perfect SG. Each chapter focuses on the clinical problems and the indications for the sleeve, and describes the technique step-by-step (including videos), the staplers, the different sizes of bougies, reinforcement of the sutures after the sleeve and the metabolic effects of surgery.

Further, it includes a chapter on revision surgery and revision procedures, not only from sleeve to other procedures, but also from other procedures to SG. The last section offers an overview of what the authors imagine the future holds for this bariatric procedure.

The Perfect Sleeve Gastrectomy - A Clinical Guide to Evaluation, Treatment, and Techniques is an ideal reference resource for general surgeons, bariatric surgeons, endoscopists and gastroenterologists as well as researchers with an interest in obesity and its management. It also appeals to residents and fellows, dietitians, diabetes specialist, psychotherapists and hospital administrators and quality officers.

Almino C. Ramos is the current President of the IFSO-International Federation for the Surgery of Obesity and Metabolic Disorders, has Master Degree and PhD proficiency in surgery and is Professor at UNICAMP State University of Campinas in Sao Paulo-Brazil and Medical Director of Gastro-Obeso-Center Metabolic Optimization Center, a Center of Excellence in bariatric and metabolic surgery in Sao Paulo-Brazil. Dr. Ramos has been fully dedicated to bariatric and metabolic surgery since 1999. Former President of the Brazilian Bariatric and Metabolic Society (SBCBM) (2013-14) was IFSO Latin America Chapter Member at Large (2012-2014), IFSO Secretary-Treasurer (2014-17) and member of Executive Board of IFSO, International and Honorary Fellow of ASMBS and ACS member as FACS. Academically Dr. Ramos has been involved in several medical studies as author or co-author of more than 100 peer-reviewed publications involving articles and book chapters. Also has worked in the organizing and scientific committees of several symposiums, courses and congresses. Member of Editorial Board of Obesity Surgery, Surgery of Obesity and Related Diseases (SOARD)  and ABCD Journals. He has served as faculty in several courses and congresses all over the world as well performed more than 500 demonstratives live surgeries in different countries. His practice involves experience with all the different laparoscopic bariatric/metabolic procedures with expertise in Roux-en-Y Gastric Bypass and Sleeve Gastrectomy with active interest in revisional and metabolic surgery. Besides the great experience with laparoscopic surgery, Dr. Ramos has also been working with robotic and endoscopic regular surgery practice.

Is a general and gastrointestinal surgeon. He works in Buenos Aires, Argentina, in the field of Bariatric and minimally invasive surgery.

Graduated from the School of Medicine at Buenos Aires University, made his surgical training in Buenos Aires and then continued his posdoctoral research training in USA, lead by Prof. Michel Gagner.

Member of the editorial board of many national and international journals. Authored more than 300 papers published and presented at global and national journals and conferences. Multiple presentations, panelist and participations in conferences in Argentina and abroad. Coordination and management of many courses and congresses in the country and abroad. Author of 38 book chapters.

Dr. Palermo is past President of the International Club of Young Laparoscopic Surgeons (ICYLS) where he served as president from 2011 to 2019.

He currently is the coordinator of Bariatric Surgery Centro CIEN – DIAGNOMED in Buienos Aires, Argentina and staff surgeon at the DAICIM Foundation.

Trained in minimally invasive surgery in the early ’90s in Montpellier, he founded the bariatric department in a private practice in Marseille (France) in 2000.

He continues to prove his interest in new bariatric approaches by developing resleeve gastrectomy, spider surgery and barclip surgery.

He is now bringing his experience to the Gulf by joining several renowned hospitals across the region and looking into training young surgeons of the region to minimally invasive and bariatric surgery.

Professor of Digestive Surgery at Montpellier University Hospital. He is recognized worldwide as an expert in bariatric sleeve surgery.
He was one of the first to integrate LPG techniques into the pre and postoperative management of the obese patient. He spent more than a year at Mount Sinai Hospital in New York, world leader in the field. Director of the bariatric and metabolic surgery team since 2007 at CHU Montpellier. Expert in laparoscopic technique. Creator of “N” Sleeve gastrectomy.

He did his surgical training at McGill University in Montreal from 1982-1988. During his residency he completed 2 years of a Ph.D. program on human lipolysis in sepsis at the Royal Victoria Hospital, McGill University from 1984-1986. Dr. Gagner also completed fellowships in hepatic surgery at Hopital Villejuif in Paris, France and pancreatico-biliary surgery at Lahey Clinic Medical Center in Burlington, Massachusetts, from 1989-1990.

He has over 300 published journal articles, 40 book chapters, and 8 books on minimally invasive surgery. He has been visiting professor and operated in over 60 institutions in 48 countries. He has held prominent positions in more than 35 societies and organizations, and has served on the editorial boards of 12 surgical journals.

“The book is intended to be consumed by both medical and surgical practitioners. However, the vast majority of information will be more useful to surgeons. … This is a very good book. … This book takes a necessary step toward unifying the approach of bariatric surgeons. It has a thoughtful outline and does a commendable job of addressing many of the inconsistencies and controversies on the sleeve. This should be a useful resource for the newly minted bariatric surgeon or fellow.” (Peter Nau, Doody's Book Reviews, August 28, 2020)