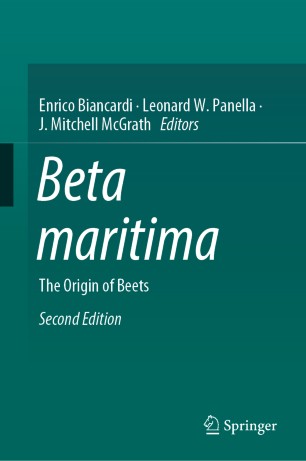 The Origin of Beets

This book, now in its second edition, provides researchers and operators a complete description of all aspects regarding the wild ancestor of sugar beet. The possibility of crossing modern crops with the ancestors from which they are derived in order to recover some traits lost through domestication is increasingly attracting interest. The selective process implemented by the first growers led to the elimination of features not considered useful at the time. Yet some of these lost traits have now become very important. In fact, in many areas sugar beet cultivation would now be impossible without the transfer of some genetic resistances from Beta maritima, the crop’s ancestor. Moreover, the isolation of such traits is becoming increasingly critical with regard to current and future environmental and economic considerations on e.g. the use of pesticides.

This second edition replaces certain photographs and has been updated to reflect the latest advances and findings. One chapter and several sections have been rewritten, and significant revisions have been made throughout the text. The new techniques provide breeders with massively improved analytical means for the safest and fastest selection procedures. Not only will these techniques allow Beta maritima to take on a far greater role as a source of favorable traits; the relative ease with which these characteristics can be transferred will also make it possible to use the germplasm of the whole genus Beta and Patellifolia, which to date has been highly complex, if not impossible, due to the difficulties of hybridization.