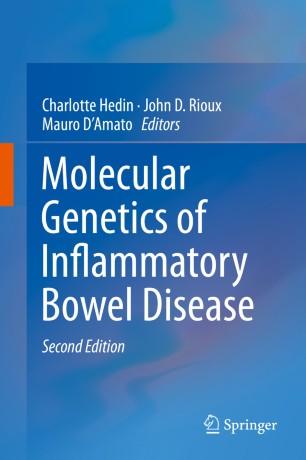 Inflammatory bowel disease (IBD) affects 1% of people worldwide. This condition is partly inherited, and genetic research has made enormous progress during the last few years, providing important insight into disease pathogenesis. This book provides a concise but complete overview of existing knowledge, with particular focus on the molecular and genetic mechanisms at the basis of IBD.

Invited experts, at the frontline of IBD research, introduce basic concepts in the pathophysiology of IBD and its two major forms Crohn’s disease and ulcerative colitis, provide a historical perspective and highlight latest discoveries of IBD genetic research, describe how this information has helped to unravel novel pathogenetic pathways, and formulate a vision for future investigations and their clinical application in IBD.

State-of-the-art information contained in this book is an exceptional resource for all those in the biomedical field with a specific interest in IBD, including basic scientists, gastroenterologists, GI specialist doctors and research nurses, but also medical and biomedical students.

Dr Charlotte Hedin is a specialist in luminal gastroenterology at the Karolinska University Hospital in Stockholm. She completed her PhD on Crohn’s disease pathogenesis at King’s College London and Queen Mary University of London. In 2017 she was awarded a UEG Rising Star award for her research in IBD, and in 2018 the Karolina prize for “Exemplary patient flow and quality work” at the Karolinska Hospital. She holds a clinical post-doctorate from the Karolinska Hospital. She is a member of the Swedish Organisation for the study of IBD (SOIBD)) and is committee member for the European Crohn’s and Colitis Organisation (ECCO). In addition she collaborates in international IBD research projects, (including the GEM project). Dr Hedin’s research focusses on delineating pathogenic pathways in IBD through studying at-risk individuals (families of IBD patients) and defining the process of mucosal healing.

Dr John D. Rioux is a Full Professor of Medicine at Université de Montréal (UdeM) and Senior Researcher at the Montreal Heart Institute (MHI) and holder of the Canada Research Chair in Genetics and Genomic Medicine. He is a founding member of multiple international consortia and currently co-leads the International IBD Genetics Consortium, is Chair of the Steering Committee of the NIDDK IBD Genetics Consortium and is the leader of the IBD Genomic Medicine (iGenoMed) Consortium. Dr. Rioux’s research focuses on three main areas: (1) genetic studies to identify risk factors for common and rare diseases; (2) functional studies to understand how these genetic risk factors protect or predispose to disease; and (3) integrative human studies to identify predictive biomarkers of important clinical outcomes. Dr. Rioux’s work has led to over 200 publications, cited over 30,000 times.

Dr Mauro D’Amato is Professor of Genetics and Genomics and Head of the Gastrointestinal Genetics Unit at the School of Biological Sciences, Faculty of Science, Monash University in Melbourne, Australia. He conceived and coordinates the largest gene-mapping effort in irritable bowel syndrome, the bellygenes initiative exploiting data from >800,000 individuals, has served in the Management Committee of several consortia including the International IBD Genetics Consortium, and is member of the European Microscopic Colitis Group. His team combine genomic, computational and pre-clinical expertise to elucidate the pathogenetic mechanisms predisposing to inflammatory and functional gastrointestinal diseases. The druggable genome, nutrigenetics and host (genome) - microbiota interactions are also new research lines within the group. D’Amato’s research has resulted in more than 150 publications and over 13,000 citations.

“It would be a great read for gastroenterology specialists, gastroenterology fellows, and basic scientists concerned with inflammatory bowel disease. … The authors have done an excellent job.” (Luis F Escobar, Doody’s Book Reviews, May 15, 2020)