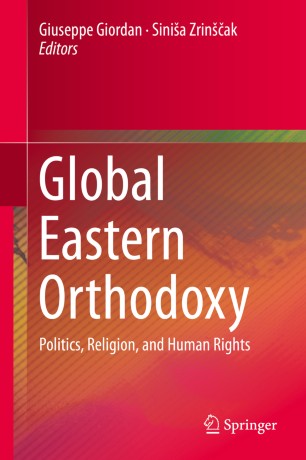 This volume highlights three intertwined aspects of the global context of Orthodox Christianity: religion, politics, and human rights. The chapters in Part I address the challenges of modern human rights discourse to Orthodox Christianity and examine conditions for active presence of Orthodox churches in the public sphere of plural societies. It suggests theoretical and empirical considerations about the relationship between politics and Orthodoxy by exploring topics such as globalization, participatory democracy, and the linkage of religious and political discourses in Russia, Greece, Belarus, Romania, and Cyprus. Part II looks at the issues of diaspora and identity in global Orthodoxy, presenting cases from Switzerland, America, Italy, and Germany. In doing so, the book ties in with the growing interest resulting from the novelty of socio-political, economic, and cultural changes which have forced religious groups and organizations to revise and redesign their own institutional structures, practices, and agendas.

Siniša Zrinščak teaches Sociology at the Faculty of Law, University of Zagreb. He served as President of ISORECEA (International Study of Religion in Eastern and Central Europe Association) in the period 2006-2014, and as General Secretary of the International Society for the Sociology of Religion 2013-2017. He is associate editor in the European Journal of Social
Work and is member of Editorial Boards of several peer-review journals: Social Compass, Journal of Religion in Europe, Religion and Society in Central and Eastern Europe, etc.