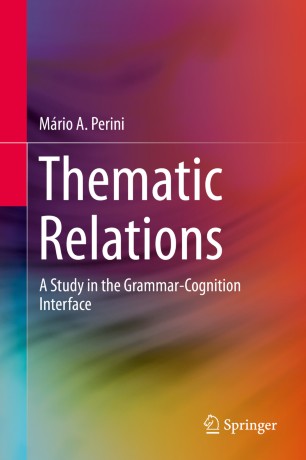 A Study in the Grammar-Cognition Interface

This book presents a proposal to better define thematic relations by exploring the relation between language and cognition. It analyzes the relation between grammatically defined roles such as agent and patient (semantic roles), and elaborate thematic relations (ETRs) actually accessible to language users. It shows that many phenomena previously analyzed as grammatical can be described in a more simple and convenient way by postulating direct connection between syntactic complements and cognitive relations present in the schema evoked by the verb.

The volume focuses on a topic which has been the object of much discussion in the recent literature, namely the definition and delimitation of semantic roles, proposing new solutions to some important theoretical and practical problems in the description of the lexicogrammatical structure of languages, and in particular of verb valency. It shows that in many cases a direct relation can be established between morphosyntactic units and functions, on one hand, and ETRs, on the other, without the intermediation of grammatically defined semantic roles. This makes it possible to analyze thematic relations that have been traditionally problematic, such as the patient, in a linguistically simple and cognitively well-motivated way.

Thematic Relations – A Study in the Grammar-Cognition Interface will be a useful resource for practicing linguists working on the analysis of natural languages, in particular on verb valency; verb subcategorization and thematic structure; semantic (thematic) roles, their definition and syntactic coding; the relation between grammatical structure and cognitive schemata (frames); and the structure of the lexicon.