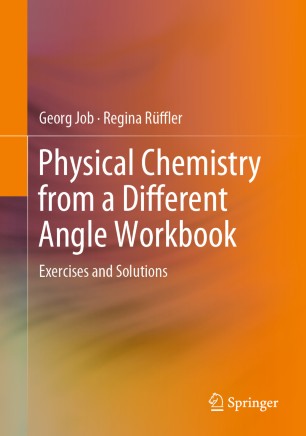 As a companion to the undergraduate textbook “Physical Chemistry from a Different Angle”, this workbook offers an excellent opportunity to deepen the understanding of the concepts presented in the textbook by addressing specific problems. The workbook is divided into two parts: a first part with nearly 200 exercises and a second part providing the corresponding detailed solutions with helpful comments, enabling students to learn independently.

Georg Job studied chemistry at the University of Hamburg, where he received in 1968 his PhD degree supervised by A. Knappwost. He was a lecturer at the Institute of Physical Chemistry of the University of Hamburg from 1970 to 2001. Two guest lectureships brought him to the Institute for Didactics of Physics at the University of Karlsruhe (1979-80) and to the Tongji University in Shanghai (1983). Already as a student, G. Job was looking for ways to make the abstract conceptual structure of thermodynamics easier to understand and thus easier to use. This finally led to the publication of the book “A New Concept of Thermodynamics” in 1972. In the following, the new teaching concept was consistently developed and extended in its application, so that it eventually included most parts of physical chemistry. G. Job presented the new concept in numerous articles and lectures at national and international conferences. In cooperation with R. Rüffler, the textbook “Physical Chemistry from a Different Angle” was published. As a companion to the textbook, this students´ manual with numerous exercises and the corresponding detailed solutions was written.
Regina Rüffler studied chemistry at the Saarland University, where she received in 1991 her PhD degree supervised by U. Gonser. She was a lecturer at the Institute of Physical Chemistry of the University of Hamburg from 1989 to 2002, interrupted by a two-year stay as a guest researcher at the Saarland University. During her lectureship she gave numerous lectures and supervised practical courses and numerical exercises at the bachelor´s as well as the master´s level. Her passion for teaching led her to join the Eduard Job Foundation in 2002. In addition to writing the textbook as well as the students´ manual about physical chemistry in cooperation with G. Job, she creates instructions for the more than one hundred experiments integrated into the textbook and produces corresponding educational videos for which she has won several prizes (https://job-stiftung.de/index.php?demonstration-experiments). She has also presented the new teaching concept in all its facets at numerous national and international conferences and has implemented it in the experimental lecture "Thermodynamics" for students of wood science at the University of Hamburg.