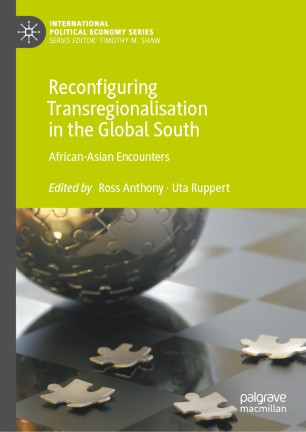 Reconfiguring Transregionalisation in the Global South

This volume examines the Africa-Asia relationship from a transregional perspective, namely as a set of emergent social, political and economic practices spanning a number of analytical and spatial scales. Drawing on a host of countries from both regions, the contributions illustrate how encounters increasingly transcend fixed territorial categories at local, national and regional levels. While large-scale political and economic considerations tend to dominate in Asia-Africa related literature—for instance, in China-Africa, BRICS and South-South discourses—the current volume seeks to foster dialogue between these broader levels of analyses and more localized social practices and experiences, including the role of civil society, cultural production and migration. With an emphasis on the “trans” aspects of inter-regional exchange, the volume contributes to a better understanding of new forms of space-making between these two increasingly important regions.
Ross Anthony is Research Fellow in the Department of Modern Foreign Languages at Stellenbosch University, South Africa. From 2014 to 2018, he was the Director of the Centre for Chinese Studies, also at Stellenbosch University.
Uta Ruppert is Professor of Political Science and Political Sociology at Goethe University Frankfurt, Germany, where she was also one of the initiators and principal investigators of the AFRASO research program on “Africa’s Asian Options.”