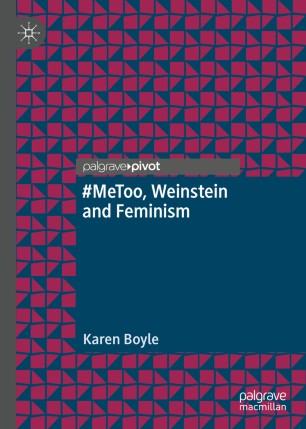 “In a moment when scholars and activists are wrestling with the cultural and political impact of #MeToo, Boyle carefully parses the differences between a ‘moment’ and a movement, and importantly reminds us to think beyond the hashtag to consider history, political contradictions, and the limits of media visibility.”

“Karen Boyle shows us how mainstream media coverage of the #MeToo moment re-focused our attention away from violence towards women, towards the interests of men: men’s right to sexual freedoms, and their right to have jokes and ‘banter’. Her profound analysis asks us to reflect on the fundamental question: why do our media narratives STILL not ask why men rape?”

“Professor Boyle writes that she hopes to demonstrate how those in media studies might reintegrate and learn from feminist activism and interdisciplinary scholarship on men’s violence against women. She can be congratulated in achieving this - providing an exemplary text demonstrating the crucial role of feminist media scholars in advancing theoretical and practical knowledge on pressing social problems.”

This book provides a feminist analysis of #MeToo and the sexual assault allegations against celebrity perpetrators which have emerged since Jodi Kantor and Megan Twohey broke the Harvey Weinstein story in October 2017. It argues for the importance of understanding #MeToo in relation to a longer, and on-going, history of Anglo-American feminist activism, theory and interdisciplinary research on men’s violence against women. The introduction argues for the importance of distinguishing between #MeToo as a hashtag and a movement. Chapter 2 investigates how speaking out about rape, sexual assault and harassment on social media can be understood in relation to second-wave feminist traditions of consciousness-raising, and concludes with an analysis of how feminism – and feminists – have featured in mainstream media coverage of the Weinstein case. Chapter 3 uses Liz Kelly’s (1988) theorisation of the continuum of sexual violence to discuss how feminists understand connections between different forms of male violence against women and explores the challenges of translating feminist theory into media commentary. Chapter 4, The cultural value of abuse, examines that the cultural values associated with men’s abuse with an emphasis on the film and television industries. The book concludes with an exploration of what the #MeToo era has meant for men, focusing first on men as victim/survivors, before moving on to consider how alleged perpetrators are situated in relation to narratives of victimisation and of monstrosity.
Karen Boyle (@ProfKarenBoyle) is Professor of Feminist Media Studies and Programme Director for Applied Gender Studies at the University of Strathclyde, Scotland. Karen is the author of Media and Violence: Gendering the Debates (2005), editor of Everyday Pornography (2010) and co-founder of Gender Equal Media Scotland (@EqualMediaScot).

Karen Boyle (@ProfKarenBoyle) is Professor of Feminist Media Studies and Programme Director for Applied Gender Studies at the University of Strathclyde, Scotland. Karen is the author of Media and Violence: Gendering the Debates (2005), editor of Everyday Pornography (2010) and co-founder of Gender Equal Media Scotland (@EqualMediaScot).