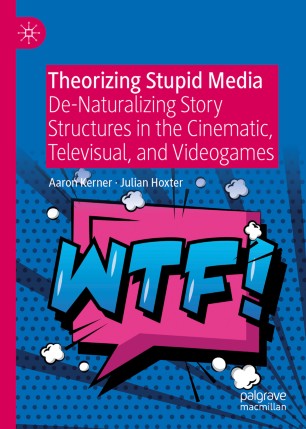 De-Naturalizing Story Structures in the Cinematic, Televisual, and Videogames

This book explores the stupid as it manifests in media—the cinema, television and streamed content, and videogames. The stupid is theorized as media that “fails” to conform to established narrative conventions, often surfacing at evolutionary moments. Each chapter explores different manifestations of the stupid: exemplified in the Transformers franchise the contemporary Hollywood vernacular privileges kinetic qualities over conventional narration, and is often dismissed as being stupid. The stupid is also evident in genre failures. Narrative dissonance, where a story “feels off”, might be perceived as stupid—Adventure Time being a key example. “Ludonarrative dissonance” refers to instances in videogames (e.g., Bioshock) where gameplay seemingly runs counter to the narrative, thus stupefying. The authors take the film Sucker Punch as a concluding exercise, applying the book’s theorization of the stupid. This book is addressed to those interested in media that is quirky, spectacle-driven, or generally hard to place—stupid!