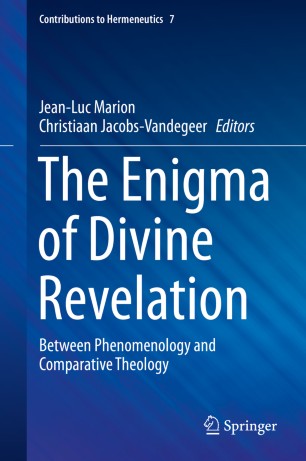 Between Phenomenology and Comparative Theology

This volume explores the possibilities and pressures of the language of revelation on human understanding. How can we critically account for divine self-disclosure in the linguistically mediated world of human concerns? Does the structure of interpretation limit the language of revelation? Does revelation open up new horizons of critical interpretation? The volume brings together theologians who approach the interactions of revelation and hermeneutics with different perspectives, including various forms of phenomenology and comparative theology. It approaches the theme of revelation – central as it is to the theological endeavour – from several angles rather than a single methodological program. Dealing as it does with revelation and understanding, the volume addresses the foundational issues at stake in the challenges around change, identity, and faithfulness currently facing the church.

Jean-Luc Marion is emeritus professor of philosophy at the Université Paris-Sorbonne (Paris IV) and the Andrew Thomas Greeley and Grace McNichols Greeley Professor of Catholic Studies and Professor of the Philosophy of Religions and Theology at the University of Chicago. He was elected to l’Academie Francaise in 2008 and recognized as an immortel (member) in 2010.  His many translated works include, God Without Being (1991), Reduction and Givenness: Investigations of Husserl, Heidegger, and Phenomenology (1998), Cartesian Questions: Method and Metaphysics (1999), The Idol and Distance (2001), Being Given: Toward a Phenomenology of Giveness (2002), The Crossing of the Visible (2004), In Excess: Studies in Saturated Phenomena (2004), The Erotic Phenomenon (2006), In the Self’s Place (2012), and Givenness and Revelation (2018). Marion has received multiple honourary doctorates, including from the Australian Catholic University in 2015.

Dr Christiaan Jacobs-Vandegeer is the Director of Stakeholder Relations for the Faculty of Theology and Philosophy and a researcher in the Institute for Religion and Critical Inquiry at Australian Catholic University. He has authored articles in international journals and with Neil Ormerod published, Foundational Theology: A New Approach to Catholic Fundamental Theology (Fortress Press, 2015). He is also a chief investigator in a major research program titled, “Atheism and Christianity: Moving Past Polemic.”