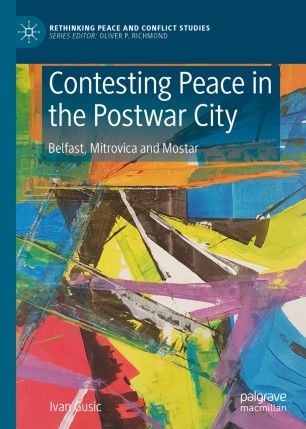 Contesting Peace in the Postwar City

“Contesting Peace in the Postwar City is key reading for urban and peace and conflict scholars. In this impressive and meticulously researched book, Gusic reflects on the ways in which divisions are routinised in the everyday landscape of divided cities and skilfully investigates how change and continuity are governed in postwar urban spaces. The book provides rich empirical material from the cities of Mostar, Mitrovica and Belfast, drawing on nuanced fieldwork insights.”
Stefanie Kappler, Durham University, UK
“Ivan Gusic sets out a powerful, theoretically critical and empirically rich account of the trajectories of cities after war. The strength of the work is that it brings an understanding of the urban condition into relation with ethno-national conflict and the survival of violence. Gusic unsettles dominant narratives in peace studies by offering a grounded evaluation of three cities coming out of violence and points to the importance of place in peacebuilding processes.”
Brendan Murtagh, Queen’s University Belfast
This interdisciplinary book explores why the postwar city reinforces rather than transcends its continuities of war in peace. It begins by theorising war-to-peace transitions as essentially contestations over what peace is and how to socio-politically order society and then proceeds to analyse different urban conflicts over peace(s) in postwar Belfast (Northern Ireland), Mitrovica (Kosovo) and Mostar (Bosnia-Herzegovina). Focusing on diverse themes such as segregated education, clientelism, fear, paramilitaries, and built environment, it shows how conflict lines from war – as well as its violence, repression, and disorder – are continuously perpetuated in and by the postwar city. Yet it also discovers glimpses of critical voices that try to bridge the antagonistic divides permeating the postwar city by utilising its transcending potential. This book is written in the nexus between peace research and urban studies, but will also appeal to scholars within political geography, international relations, political science, urban planning, governmentality studies, and anthropology.
Ivan Gusic is Postdoctoral Researcher at Lund University, Sweden. His research is focused on the nexus between peace research and urban studies, in particularly focusing on postwar cities, urban violence, and city-specific ways of building peace.