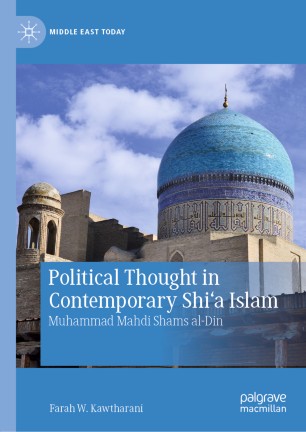 This book offers an intellectual history of one of the leading Shi’i thinkers and religious leaders of the 20th-century in Lebanon, Shaykh Muhammad Mahdi Shams al-Din. The author examines his role as the foremost figure of Shi’i intellectual life, a key associate of Musa al-Sadr, and president of the Islamic Shi‘i Supreme Council of Lebanon, having maintained the independence of this institution until his death from the domination of Shi‘i political parties. The core of the book consists of three interrelated main themes that constitute the major threads of Shams al-Din’s intellectual legacy: a discussion of Islamic government involving a critique of Khomeini’s theory of wilāyat al-faqīh, the role of Islam within civil government, and the necessity for political integration of the Shi‘a in their Arab nation-states to protect them from policies that raise doubts over their political allegiance to their respective countries. The project will appeal to scholars, students, academics, and researchers in Middle Eastern politics and history.
Farah W. Kawtharani has been Assistant Professor of Arabic and Islamic Studies at the University of Michigan-Dearborn and a Visiting Scholar at Concordia University, USA.