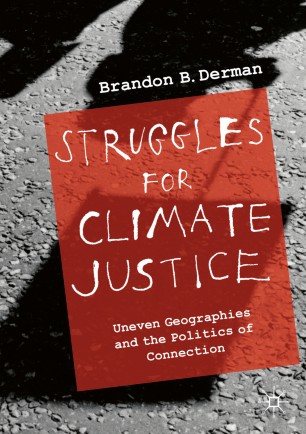 Uneven Geographies and the Politics of Connection

This book provides an accessible but intellectually rigorous introduction to the global social movement for ‘climate justice’ and addresses the socially uneven consequences of anthropogenic climate change.
Deploying relational understandings of nature-society, space, and power, Brandon Derman shows that climate change has been co-produced with social inequality. Mismatching levels of responsibility and vulnerability, and institutions that emerged in tandem with those disproportionalities compose the terrain on which NGOs and social movements now contest climate injustice in a wide-ranging “politics of connection.” Case-based chapters explore the defining commitments of affected and allied communities, and how they have shaped specific struggles mobilizing human rights, international treaties, transnational activist forums, national and local constituencies, and broad-based demonstrations. Derman synthesizes these cases and similar efforts across the globe to identify and explore crosscutting themes in climate justice politics as well as the opportunities and dilemmas facing advocates and activists, and those who would ally with them going forward.
How should we understand campaigns for climate justice?  What do these initiatives share, and what differentiates them?  What, in fact, does “climate justice” mean in these contexts?  And what do the framing and progression of such efforts in different settings suggest about the broader conditions that produce and sustain climate injustice, how those conditions could be unmade, and what might take their place? Struggles for Climate Justice approaches these questions from an interdisciplinary perspective accessible to graduate and advanced undergraduate students as well as scholars of geography, social movements, environmental politics, policy, and socio-legal studies.
Brandon Barclay Derman is Assistant Professor in Environmental Studies at the University of Illinois Springfield, USA. He researches and teaches in the areas of environmental and natural resource policy and politics, political ecology, socio-legal studies, and climate change.  His recent work has appeared in the Annual Review of Law and Social Science, Climate Policy, the South African Journal on Human Rights, and edited volumes on climate change, justice, and global governance.