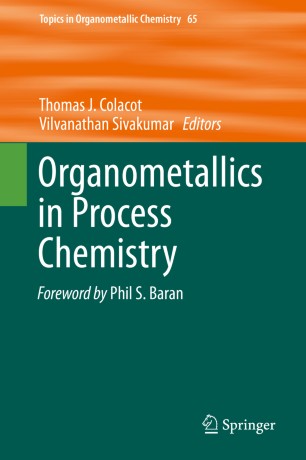 This volume gives an overview of the applications of organometallic chemistry in process chemistry relevant to the current topics in synthetic chemistry. This volume starts with an introduction on the historical development of organometallics in process chemistry and is followed by chapters dealing with the last five years’ development in various organometallic reaction types such as the challenging cross coupling process, construction of 3.1.0 bicycles, pressure and transfer hydrogenations of historically challenging compounds such as esters, utilization of carbon dioxide for making organic compounds by flow process, drug synthesis and metal detection and scavenging in the finished APIs. A chapter by Colacot et.al., is also devoted to the process development and structural understanding of organometallic catalysts with particular emphasis to LnPd(0) catalysts. An academia – industry collaborated chapter on the use of water as a solvent for organometallic processes is included in this book.

Thomas J. Colacot is currently working at MilliporeSigma, USA (business of Merck KGaA, Darmstadt, Germany), since May 2018 as a R&D Fellow, and Director - Global Technology Innovation (Lab and Specialty Chemicals). In 2018 he was named as one of the most outstanding researchers at Merck.

Dr. Colacot received his PhD in Chemistry from the Indian Institute of Technology Madras in 1989, and was awarded the IIT Madras’ Distinguished Alumnus Award in 2016 for his technical contributions in the field of organometallic chemistry and catalysis. Immediately after his PhD, he held postdoctoral teaching positions, working on Gr. III-V chemistry for applications of performance materials in the electronics industry, and metallocarborane for catalysis at the University of Alabama at Birmingham and at the Southern Methodist University respectively. He also had combined teaching and research positions at Florida State University and Florida A&M University.

Prior to this Dr Colacot has worked as Global R &D Manager/Technical Fellow in Homogeneous Catalysis at Johnson Matthey until May 2018. He is a co-author of more than 100 peer-reviewed publications and patents. He has also edited books such as “New Trends in Cross Coupling: Theory and Applications” (2014, RSC), “Organometallics In Process Chemistry – Topics in Organometallic Chemistry” (Springer, this volume) and Organometallic Chemistry in Industry (Wiley VCH, in press) . He has also given over 400 presentations at national and international conferences, universities and chemical and pharmaceutical companies. He is on numerous national committees and holds visiting professorships at various universities. His technical contributions to the field have resulted in many awards, amongst them the 2017 Catalysis Club of Philadelphia Award for outstanding contributions in catalysis, 2015 American Chemical Society National Award in Industrial Chemistry, 2015 IPMI Henry Alfred Medal by the International Precious Metal Institute , 2016 Chemical Research Society of India CRSI medal, and the Royal Society of Chemistry 2012 Applied Catalysis Award and Medal. In addition Thomas holds an MBA degree and is a Fellow of the Royal Society of Chemistry.

Dr. Vilvanathan Sivakumar completed his PhD in Organometallic Chemistry in 2006 under the supervision of Prof. Balaji Jagirdar in the Department of Inorganic and Physical Chemistry followed by a post-doc position with Prof. Goverdhan Mehta  in Organic Chemistry at the Indian Institute of Science, Bangalore. He joined Johnson Matthey in 2009 as Assistant Manager - Development. As a part of the R&D team in JM, he worked on the development of homogeneous and heterogeneous catalysts for a wide range of applications relevant to the pharma and agrochemical industries. In 2017, he became the Technical Services Manager which interfaces with customers, R & D, Sales & Marketing and Production.