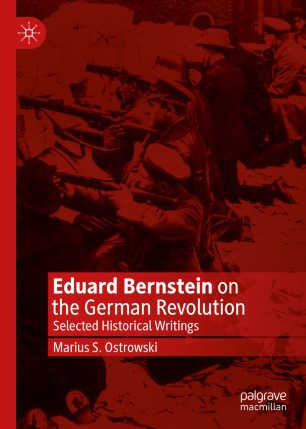 Eduard Bernstein on the German Revolution

This book presents two major texts and selected shorter writings by the social-democratic thinker and politician Eduard Bernstein, translated into English in full for the first time: The German Revolution: A History of the Emergence and First Working Period of the German Republic; How A Revolution Perished; and articles from Vorwärts and other socialist periodicals. Written in the aftermath of the 1918 German Revolution and the end of WWI, they address the overthrow of autocratic rule in Germany, and provide a live chronicle and retrospective assessment of the Weimar Republic’s foundation. Bernstein gives a detailed chronology of the German Revolution and its intellectual, economic, and political context, and offers a historical analogy in his account of the 1848 French Revolution, which differs in key respects from that of Karl Marx in The Eighteenth Brumaire of Louis Napoleon. Drawing on his own experience of the events he describes, he revisits the socialist debate over ‘reform or revolution’ that he himself had provoked at the turn of the 20th century, and consciously seeks to wrest ownership of the Revolution’s legacy away from the Spartacist and communist left. In these works, Bernstein exhorts social democrats to rally behind the nascent Republic and resist the siren-calls of its militant opponents on radical left and right, and he engages with themes of party unity, political violence, democracy, and the role of ideology that have echoed through left theory and strategy ever since.

Marius S. Ostrowski is Examination Fellow in Politics at All Souls College, University of Oxford, UK. His publications include Eduard Bernstein on Social Democracy and International Politics: Essays and Other Writings (2018) and Left Unity: Lessons from Left History (2019).