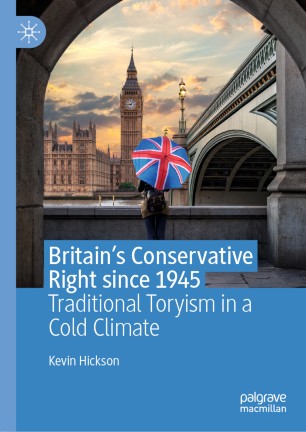 Traditional Toryism in a Cold Climate

This book provides a detailed analysis of the evolution of the Conservative Right in Great Britain since 1945. It first explores the movement’s core ideas and highlights points of tension between its different strands. The book then proceeds with a thematically structured discussion. The Conservative Right’s views on the decline and fall of the British Empire, immigration control, European integration, the British constitution, the territorial integrity of the United Kingdom, Britain’s economy, the welfare state, and social morality and social change are all explored. In the concluding chapter, the author evaluates the extent to which the Conservative Right has succeeded in its core objectives since 1945 and addresses how it can best respond to a contemporary Britain in which it instinctively feels uncomfortable. The book is based on extensive elite interviews and archival research and will be of interest to anyone who seeks to place the contemporary Conservative Right in a greater historical context.

Kevin Hickson is Senior Lecturer in British Politics at the University of Liverpool, UK. He is the (co-)author or (co-)editor of over 15 books and has also written numerous journal articles and book chapters. He is a Fellow of the Royal Historical Society and of the Royal Society of Arts and a Senior Fellow of the Higher Education Academy.

Kevin Hickson is Senior Lecturer in British Politics at the University of Liverpool, UK. He is the (co-)author or (co-)editor of over 15 books and has also written numerous journal articles and book chapters. He is a Fellow of the Royal Historical Society and of the Royal Society of Arts and a Senior Fellow of the Higher Education Academy.

“A masterly survey of the ideology, organisations, policies and personalities of a wing of the Conservative Party which has been too often dismissed as marginal. Kevin Hickson’s book disentangles the various strands of the Conservative Right, showing both the recurrence of such major themes as sovereignty, Empire, immigration and the economy and their implications for Conservative policy and party management. The book will be essential reading for anyone who seeks to understand the internal problems of the contemporary Conservative Party and the dimensions of the task facing the leadership as it seeks to restructure the Conservatives into a united and electorally appealing force in British politics.” (Gillian Peele, Emeritus Professor, Lady Margaret Hall, University of Oxford, UK)
“The beginning of conservatism is an ideal of political harmony and its end, the experience of political discord. The history of the Conservative Party records attempts to reconcile the compromises required by the latter in terms of the values proclaimed by the former. As an institutional artefact, the party always has been composed of diverse tendencies and the distinctions between them are as deep as their common identity is broad. Explaining both difference and commonality requires a subtle grasp of relations between principles, personalities and politics. Kevin Hickson’s thematic study of Britain’s Conservative Right since 1945 does just that. It makes sense of a paradox: thinkers and politicians who understand their beliefs to be the core of conservatism, yet who feel themselves to be on the margins of Conservative influence. In doing so, this book provides an important corrective to the dogmatic simplicities informing much of contemporary political discourse.” (Arthur Aughey, Emeritus Professor, Ulster University, Northern Ireland)
Buy options