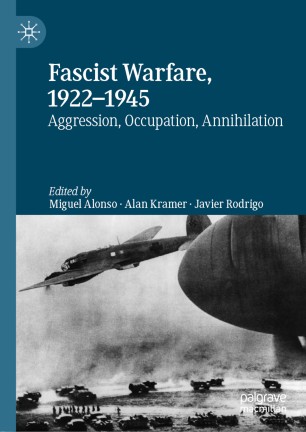 This groundbreaking book explores the interpretative potential and analytical capacity of the concept ‘fascist warfare’. Was there a specific type of war waged by fascist states? The concept encompasses not only the practice of violence at the front, but also war culture, the relationship between war and the fascist project, and the construction of the national community. Starting with the legacy of the First World War and using a transnational approach, this collection presents case studies of fascist regimes at war, spanning Nazi Germany, Fascist Italy, Francoist Spain, Croatia, and Imperial Japan. Themes include the idea of rapid warfare as a symbol of fascism, total war, the role of modern technology, the transfer of war cultures between regimes, anti-partisan warfare as a key feature, and the contingent nature and limits of fascist warfare.

“A valuable contribution not just to comparative fascist studies, but to our understanding of the state violence that fascism unleashed on a world still reeling from the Great War. With its blend of sophisticated conceptualization and historiographical detail across an impressive geographical scope, it casts a powerful, baleful light on the fusion of advanced technology with Manichaean ideologies of hatred that characterize the modern age.” (Roger Griffin, Oxford Brookes University, UK)

“The age of extreme violence in the 1930s and 1940s is seldom explained in broad theoretical terms. Fascist Warfare presents a stimulating and challenging thesis that fascism, broadly defined, possessed a dynamic of total violence that ended in imperial war, genocide and terrorising strategies of counter-insurgency. This will prompt a lot of hard thinking about the way such warfare has been treated historically and has the added virtue that it is treated comparatively. The volume forces us to reconsider the way mid-century violence has been presented and understood.” (Richard Overy, University of Exeter, UK)

“By enquiring whether a particularly fascist form and understanding of waging war existed in the 1930s and 1940s, this excellent book offers an intriguing new approach to the history of conflict in early twentieth-century history. Co-edited by three eminent scholars in the field, and with contributions from leading historians of fascism and conflict, the book brings together fresh perspectives on the nature of the wars unleashed by Franco's Spain, Nazi Germany, Fascist Italy, and even Imperial Japan and the Independent State of Croatia.” (Robert Gerwarth, University College Dublin, Ireland)