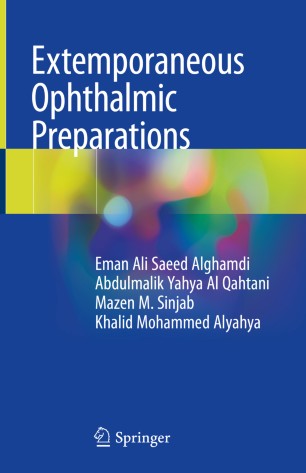 This book provides a list of concise extemporaneous ophthalmic preparations, and standardizes the formulation of the products by suggesting specific strength, route of administration, appropriate vehicle, and method of preparation. Pharmaceutical industries have greatly expanded their share of ophthalmic drugs in recent years. However, physicians and pharmacists are frequently called to prepare sterile products intended for ophthalmic use due to lack of availability of licensed drugs in the market. This book contains the most appropriate formulation of each medication based on published and documented stability data.

Extemporaneous Ophthalmic Preparations is the first book of its kind, making it a unique and valuable companion for many physicians and pharmacy practitioners who are frequently engaged in the compounding of sterile ophthalmic preparation.

She is involved in formulary management (addition, deletion, and restriction); literature evaluation, implement protocol and policy for the safe and effective use of medication; coordinating investigational drug services, including participating in evaluating protocol, providing information to patient, caregivers and healthcare providers; coordinating adverse drug reaction with Saudi Food and Drug Administration (SFDA).

Dr. Alghamdi is currently a supervisor of pharmacy students and residents completing their clinical rotation. In addition, she teaches academic courses of pharmacology in The Nursing College in Prince Sultan Military College of Health Sciences, Riyadh, Saudi Arabia.

Dr. Alghamdi was awarded by Pharmacy Guild of Australia, Queensland, for her outstanding achievement in her dissertation for the master.

Dr. Al Qahtani was graduated from the college of medicine at King Saud University in Riyadh in 1997. In 2002, he was certified the Saudi Board in Ophthalmology followed by Subspecialty Certificate in Anterior Segment from King Khaled Eye Specialist Hospital (KKESH) in 2003.

Professor Mazen M. Sinjab is currently working as a Consultant Ophthalmologist at Dr. Mazen Sinjab Eye Clinic, Dubai, UAE and at Al Zahra Medical Group, Damascus, Syria. His main field of specialty is Laser and Refractive Surgery, Cataract and Clear Lens Surgery, and Keratoconus management. He was certified in Laser and Refractive Surgery from The Royal College of Ophthalmologists in London, UK.

Professor Sinjab has a considerable contribution to ophthalmology education by his distinguished books, his outstanding Sinjab Academy channel on YouTube, and his instructional courses in ophthalmology conferences. In 2015, The Royal College of Ophthalmologists in London honored Professor Sinjab the Honorary Fellowship Certificate (FRCOphth) because of his remarkable contribution to ophthalmology education at an international level. For the same reason, he was awarded by a number of regional and international institutes.

Professor Sinjab is an advisory board member in a number of regional and international conferences, and a reviewer in international ophthalmology journals. He is also a member of the examination board in The Royal College of Surgeons in Edinburgh.

Dr. Alyahya was graduated from the College of Pharmacy at King Saud University in Riyadh, Saudi Arabia, in 1994. After that, he had his PhD Degree in clinical pharmacy from Cardiff University, the UK in 2004. In 2005, he was certified as a Specialist Clinical Pharmacist. Then in 2009, Dr. Alyahya was certified to be a consultant clinical pharmacist. In 2016, Dr. Alyahya was appointed to be the Head and Director of Drug and Poisoning Information Center (DPIC) at PSMMC in Riyadh. Further to his duties, he is chairing the PSMMC Pharmacy Newsletter, Formulary Management Team.

To assure the quality of service provided by pharmacy staff at PSMMC, Dr. Alyahya is chairing the Patients Family education and counselling team and he is an active member of the preparation team for the national and international accreditation certificate, namely The Joint Commission International (JCI) and The Saudi Central Board for Accreditation of Healthcare Institutions (CBAHI).

Dr. Alyahya has a considerable contribution to pharmacy education and training. From 2008, he has been working as a training advisor in Internal Medicine in Pharmacy Practice Residency Program, which belongs to the Saudi Commission for Health Specialties in Saudi Arabia. From 2013 to 2018, Dr. Alyahya was the director of the general clinical pharmacy residency program at PSMMC. Currently, he is the director of the clinical pharmacy residency program for internal medicine at PSMMC. Furthermore, Dr. Alyahya is working as an Adjacent Assistant Professor in a number of Saudi Universities in the field of pharmacy, such as King Saud University, Prince Nora University, and Riyadh College for Dentistry and Pharmacy.

Dr. Alyahya has participated in many local, regional, and international pharmacy conferences. Moreover, he has supervised more than 20 published and unpublished postgraduate research projects. Nevertheless, he is an advisory board member in a number of regional committees, like National Committee of Bioethics (2015-2018), Medical Service Department Scientific Research Committee (2015-2016), and Medical Service Department Pharmacy Advisory Committee (2018 till now).