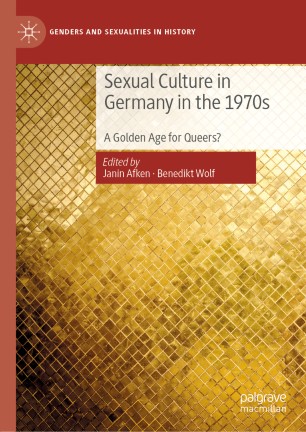 Sexual Culture in Germany in the 1970s

A Golden Age for Queers?

This book is the first attempt to present a comprehensive picture of LGBT culture in the two German states in the 1970s. Starting from the common view of the decade between the moderation of the German anti-sodomy law in 1968 (East) and 1969 (West) and the first documented case of AIDS (1982) as a ‘golden age’ for queer politics and culture, this edited collection traces the way this impression has been shaped by cultural production. The chapters ask: What exactly made the 1970s a 'legendary decade'? What was its revolutionary potential and what were its path-breaking political and aesthetic strategies? Which elements, movements and memories had to be marginalized in order to facilitate the historical construction of the 'legendary decade'? Exploring the complex picture of gay, lesbian and – to a lesser extent – trans cultures from this time, the volume provides fascinating insights into both canonized and marginalized texts and films from and about the decade.

Janin Afken is Research Assistant at Humboldt-Universität zu Berlin, Germany. Her publications include 'Geschlechterbilder/Sexualität” in Stefan-Zweig-Handbuch (2018).

Benedikt Wolf is Research Associate at Bielefeld University, Germany. His publications include Penetrierte Männlichkeit. Sexualität und Poetik in deutschsprachigen Erzähltexten der literarischen Moderne (1905–1969) (2018), and “Queer Writing” (co-authored with Andreas Krass) in The Cambridge Companion to the Literature of Berlin (2017).