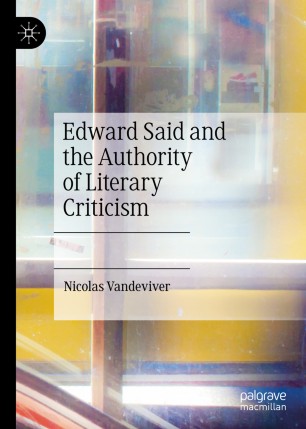 Edward Said and the Authority of Literary Criticism

This book examines the earliest writings of Edward Said and the foundations of what came to be known as postcolonial criticism, in order to reveal how the groundbreaking author of Orientalism turned literary criticism into a form of political intervention. Tracing Said’s shifting conceptions of ‘literature’ and ‘agency’ in relation to the history of (American) literary studies in the thirty years or so between the end of World War II and the last quarter of the twentieth century, this book offers a rich and novel understanding of the critical practice of this indispensable figure and the institutional context from which it emerged. By combining broad-scale literary history with granular attention to the vocabulary of criticism, Nicolas Vandeviver brings to light the harmonizing of methodological conflicts that informs Said’s approach to literature; and argues that Said’s enduring political significance is grounded in his practice as a literary critic.

Nicolas Vandeviver teaches Literary Theory in the Department of Literary Studies, Ghent University, Belgium. He is a former Fulbright Visiting Scholar and Postdoctoral Fellow of the Belgian American Educational Foundation at the Institute for Comparative Literature and Society, Columbia University, USA.

“An illuminating account of Said's early career as well as a refreshing progress through much of mid-twentieth century literary criticism, from Harry Levin to Erich Auerbach to R.P. Blackmur, Nicolas Vandeviver's Edward Said and the Authority of Literary Criticism has a great deal of authority of its own. Everyone invested in this rich period for our discipline should read it.” (Roland Greene, Mark Pigott KBE Professor in the School of Humanities and Sciences, Stanford University, USA)

“Edward W. Said’s work has lost some of its authority in especially the American academic community as postcolonial studies have given way to new fields of investigation. Nicolas Vandeviver’s solidly researched and carefully developed analysis of Said’s intellectual evolution shows that Said stood far outside the academic sub-specialty of postcolonialism and belonged to the rich if often contradictory tradition of humanism. Said’s work appears in Vandeviver’s study as a remaking of a long and great tradition against forces that contaminated it within politics of domination. Said also appears in this book as the anti-dynastic thinker he always was, as the conscience of a profession that has lessening interest in hearing his call.” (Paul A. Bové, Distinguished Professor of English, University of Pittsburgh, USA)