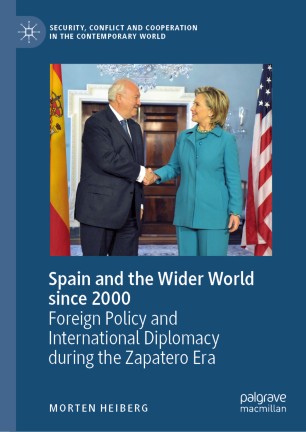 Spain and the Wider World since 2000

Foreign Policy and International Diplomacy during the Zapatero Era

This book offers the first comprehensive study of Spanish foreign policy since 2000. Based on privileged access to some of Spain’s most important foreign policy actors – including Prime Minister José Luis Rodríguez Zapatero and Foreign Minister Miguel Ángel Moratinos – the book offers an insider account of how Spanish foreign policy was shaped within the context of international diplomacy. It offers crucial new insights into the foreign policy of the PSOE governments (Spanish Socialist Workers' Party, 2004 to 2011). The volume considers the changes on the international stage since the fall of the Berlin Wall in 1989, showing how regional conflicts and tensions affected the policy agendas of the West. To increase security and prosperity at home, the 2004 Spanish socialist government reasoned that they could no longer rely exclusively on unilateral measures, old Cold War alliances or a ‘Spain-first’ approach. Against the backdrop of this changing world, the book explores the concept of ‘effective multilateralism’ put forward by the PSOE, in which Spain abandoned its hitherto unconditional support for the US and instead engaged in a series of multilateral collaborations with regions around the world. Above all, this study seeks to provide a new international history of contemporary Spain, demonstrating how domestic changes intersected with global transformations, and put forward the argument that diplomacy works.

Morten Heiberg is Professor of Spanish Studies at the University of Copenhagen, Denmark. He is an appointed member of the Royal Danish Academy and was awarded the Research Prize of Her Majesty Queen Margaret II of Denmark in 2018. He is the author of nine books, including a monograph on US-Spanish relations in the period 1975-1989 (2018).

“Is it possible to write a diplomatic history of Spain in the early 21st century? Not only is this compelling book the best documented account of Spanish foreign policy by far, Heiberg takes readers on an intriguing journey across four continents to make us understand how diplomacy works today. He uniquely combines the insider’s well-honed understanding of international politics with the analytical skills of the trained historian. Truly unforgettable.” (Ángel Viñas, Complutense University of Madrid, Spain) “Morten Heiberg shows once again his great skill in understanding the complexity of Spanish foreign policy. Written like a political thriller, this magnificent book on the foreign policy of the Zapatero government is based on extensive research and interviews with Foreign Minister Miguel Angel Moratinos, who worked overtime to restore good relations with the global hegemon, US, after Prime Minister Zapatero decided to withdraw Spanish troops from Iraq in 2004. A must read for any scholar of contemporary Spanish history and politics.” (José M. Magone, Berlin School of Economics and Law, Germany)
Buy options