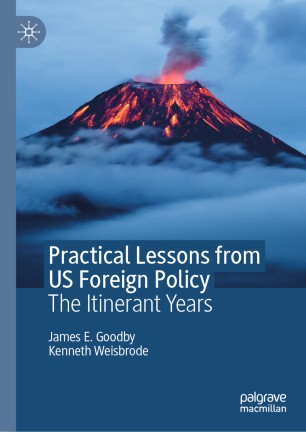 In foreign policy, the Trump administration has appeared to depart from long-standing norms of international behavior that have underwritten American primacy for decades in a more interdependent and prosperous world. In this book, a diplomat and a historian revisit that perception by examining and reproducing several of their own essays during the past twenty years. The essays reveal that Trump's style exaggerates tendencies towards unilateralism already present in the actions, if not the policies, of previous presidents, and in their neglect of three imperatives: collective security, regional integration, and diplomatic imagination. It is not too late, however, to remedy the problem by learning the lessons of the recent past.

James E. Goodby is Annenberg Distinguished Visiting Fellow at the Hoover Institution, USA. He is a retired diplomat who was involved in the creation of the International Atomic Energy Agency, and in the negotiation of the limited nuclear test ban treaty, START, the Conference on Disarmament in Europe, and cooperative threat reduction (the Nunn-Lugar program).

Kenneth Weisbrode is Assistant Professor in the Department of History at Bilkent University, Turkey. He is a former defense analyst who has worked at the Atlantic Council of the United States, the European University Institute, the International Institute for Strategic Studies, and the United States Institute of Peace.