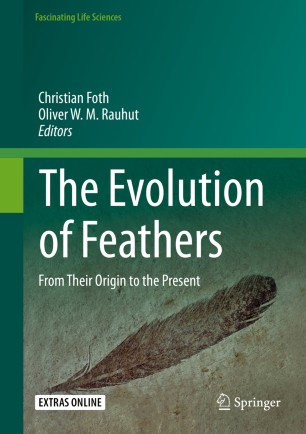 The Evolution of Feathers

From Their Origin to the Present

Feathers are one of the most unique characteristics of modern birds and represent the most complex and colourful type of skin derivate within vertebrates, while also fulfilling various biological roles, including flight, thermal insulation, display, and sensory function. For years it was generally assumed that the origin of flight was the main driving force for the evolution of feathers. However, various discoveries of dinosaur species with filamentous body coverings, made over the past 20 years, have fundamentally challenged this idea and produced new evolutionary scenarios for the origin of feathers.

This book is devoted to the origin and evolution of feathers, and highlights the impact of palaeontology on this research field by reviewing a number of spectacular fossil discoveries that document the increasing morphological complexity along the evolutionary path to modern birds. Also featuring chapters on fossil feather colours, feather development and its genetic control, the book offers a timely and comprehensive overview of this popular research topic.

Christian Foth: Dipl. Biol., Dr. rer. nat. is a palaeobiologist, who studied biology at the University of Rostock and gained his doctoral degree in palaeontology from the Ludwig Maximilian University in Munich for studying the skull shape evolution of archosaurian reptiles. His research focusses on the evolution of archosaurs and the origin of birds. He currently works as a senior assistant at the Department of Geosciences of the University of Fribourg.

Oliver W. M. Rauhut: Dipl. Geol., PhD, Dr. habil, apl. Prof. is a vertebrate palaeontologist who studied geology and palaeontology at the Free University of Berlin, and gained his PhD from the University of Bristol on the phylogenetic relationships of theropod dinosaurs. He is an expert in the evolution of dinosaurs and other extinct reptiles and works currently as Curator for Lower Vertebrates at the Bavarian State Collection for Palaeontology and Geology and adjunct Professor for Palaeontology at the Department of Earth and Environmental Sciences of Ludwig Maximilian University in Munich.