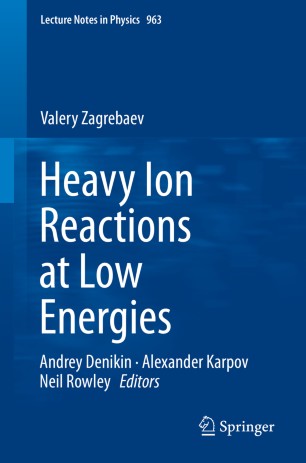 This book is based on Valery Zagrebaev's original papers and lecture materials on nuclear physics with heavy ions, which he prepared and extended through many years for the students of nuclear physics specialties.
Thе book outlines the main experimental facts on nuclear reactions involving heavy ions at low energies. It focuses on discussions of nuclear physics processes that are a subject of active, modern research and it gives illustrative explanations of these phenomena in the framework of up-to-date theoretical concepts.
This textbook is intended for students in physics who have completed a standard course of quantum mechanics and have basic ideas of nuclear physics processes.
It is designed as a kind of lifeboat that, at the end of the course, will allow students to navigate the modern scientific literature and to understand the goals and objectives of current, on-going research.

Valery Zagrebaev (1950-2015) was a doctor of physical and mathematical sciences, full professor, deputy director of the Flerov Laboratory of Nuclear Reactions of the Joint Institute for Nuclear Research (Dubna - Russia). He was a world-famous scientist, a well-known specialist in the field of low-energy nuclear physics. He had authored more than 150 scientific articles published in mainstream journals dedicated to nuclear physics such as European Physical Journal A, Physical Review C, Journal of Physics G, and Nuclear Physics A.
This book is based on the author’s original works and lectures on the physics of nuclear reactions with heavy ions, which he taught for many years to senior students of nuclear physics specialties.
Andrey Denikin is a scientific researcher at the Joint Institute for Nuclear Research (JINR) in Dubna (Russia). He obtained his PhD in nuclear physics from Saint-Petersburg university in 2002 and habilitated in 2003. Since 2008, he leads a group for theoretical and computational physics at JINR. He has published more than 50 peer-reviewed articles in international journals. His work mainly involves theoretical studies of the dynamics of nuclear collisions within semi-classical and quantum mechanical approaches and applications to the nuclear reactions with heavy ions and light exotic nuclei. He was one of the initiators and developers of the unique web-based project "Low energy nuclear knowledge-base NRV". His work includes a significant portion of educational activities. Since 2004, he is an associated professor at the Department of Nuclear Physics at Dubna State University, where he later became Dean of the natural and engineering science faculty, and then Vice-Rector of the University.
Alexander Karpov got his doctor of physical and mathematical sciences degree from the Joint Institute for Nuclear Research (Dubna) where he works as a scientific secretary of the Flerov Laboratory of Nuclear Reactions. His research is focused on analysis of low-energy nuclear reactions leading, in particular, to formation and decay of heavy and superheavy nuclei.
Neil Rowley is Emeritus Director of Research at the Institut de Physique Nucléaire, Orsay (France). He obtained his PhD in 1973 in the Department of Theoretical Physics at the University of Oxford. After a period as Principal Scientific Officer at the SERC Daresbury Laboratory in the UK, he was appointed Scientific Director for Nuclear Physics at the Institut Pluridisciplinaire Hubert Curien in Strasbourg in 1996. During his time in Strasbourg he was a member of the Programme Advisory Committee at the Laboratori Nazionali di Legnaro, Italy and at the iThemba LABS in Faure, South Africa, and was chairman of the Scientific Advisory Committee at the Joint Institute for Nuclear Research (JINR) in Dubna, Russia, where he holds an Honorary Doctorate. He has published over 200 scientific papers and conference contributions on a wide range of nuclear physics topics, stemming mainly from international collaborations on the study of reactions between colliding heavy nuclei. In particular, he is responsible for the concept of an "Experimental fusion barrier distribution", which has been widely used in the interpretation of new experimental data by groups in many laboratories across the world.