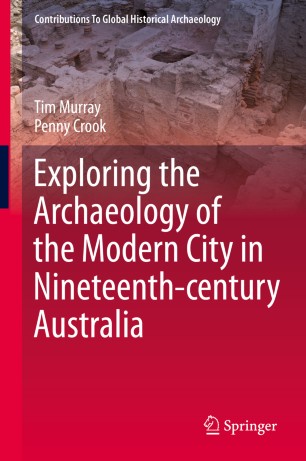 Exploring the Archaeology of the Modern City in Nineteenth-century Australia

This book presents research into the urban archaeology of 19th-century Australia. It focuses on the detailed archaeology of 20 cesspits in The Rocks area of Sydney and the Commonwealth Block site in Melbourne. It also includes discussions of  a significant site in Sydney – First Government House.  The book is anchored around a detailed comparison of contents of 20 cesspits  created  during the 19th century,   and examines patterns of similarity and dissimilarity, presenting  analyses that work towards an integration of  historical and archaeological data and perspectives. The book also outlines a  transnational framework of comparison  that assists in the larger context related to  building a truly global archaeology of the modern city.

This framework is directly  related a multi-scalar approach to urban archaeology.  Historical archaeologists have been advocating the need to explore the archaeology of the modern city using several different scales or frames of reference. The most popular (and most basic) of these has been the household. However, it has also been acknowledged that interpreting the archaeology of households beyond the notion that every household and associated archaeological assemblage is unique requires archaeologists and historians to compare and contrast, and to establish patterns. These comparisons frequently occur at the level of the area or district in the same city, where archaeologists seek to derive patterns that might be explained as being the result of status, class, ethnicity, or ideology. Other less frequent comparisons occur at larger scales, for example between cities or countries, acknowledging that the archaeology of the modern western city is also the archaeology of modern global forces of production, consumption, trade, immigration and ideology formation. This book makes a contribution to that general literature