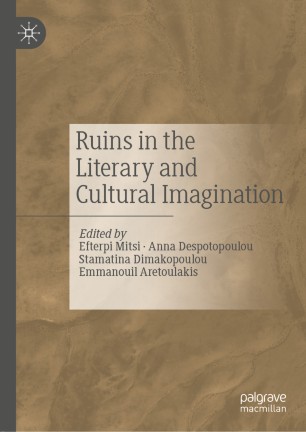 Ruins in the Literary and Cultural Imagination

This book focuses on literal and metaphorical ruins, as they are appropriated and imagined in different forms of writing. Examining British and American literature and culture in the nineteenth and twentieth centuries, the book begins in the era of industrial modernity with studies of Charles Dickens, Thomas Hardy, Henry James and Daphne Du Maurier. It then moves on to the significance of ruins in the twentieth century, against the backdrop of conflict, waste and destruction, analyzing authors such as Beckett and Pinter, Kurt Vonnegut, Robert Lowell, Anne Sexton and Leonard Cohen. The collection concludes with current debates on ruins, through discussions of Walter Benjamin and Bertolt Brecht, as well as reflections on the refugee crisis that take the ruin beyond the text, offering new perspectives on its diverse legacies and conceptual resources.

Efterpi Mitsi is Professor in English Literature and Culture at the National and Kapodistrian University of Athens, Greece.

Anna Despotopoulou is Professor in English Literature and Culture at the National and Kapodistrian University of Athens, Greece.

Stamatina Dimakopoulou is Assistant Professor in American Literature and Culture at the National and Kapodistrian University of Athens, Greece.

Emmanouil Aretoulakis is tenured Associate Lecturer in English Literature and Culture at the National and Kapodistrian University of Athens, Greece.

“This rich collection of essays demonstrates the powerful hold that ruins have on the Western imagination. Exploring literal and metaphorical ruins, the authors take us from eighteenth century Athens, as the site where the Gothic originates, to the twenty-first century, when the city’s ruinscape becomes the terrain for timely reflections on Europe’s refugee crisis and the concept of hospitality. Ranging from literary studies to philosophical dialogues, the critical thinking that sustains Ruins in the Literary and Cultural Imagination proves that ruins are not esoteric objects and ruin studies are not an antiquated field. These ruinologists passionately engage with the most pressing political and cultural questions of our moment and demonstrate the continued relevance of the humanities with their fine-grained textual and visual analyses.” (Julia Hell, Professor of German at the University of Michigan, USA, and co-editor of Ruins of Modernity (2010) and author of The Conquest of Ruins: The Third Reich and the Fall of Rome (2019))

“The most ambitious, wide-ranging, and humane study of ruins in the literary imagination to date, this book argues strongly for the importance of ruins in understanding our past, the risks we face in the future, and the perennial human capacity to grow beyond disaster.” (Catherine Brown, Senior Lecturer in English, New College of the Humanities, UK)