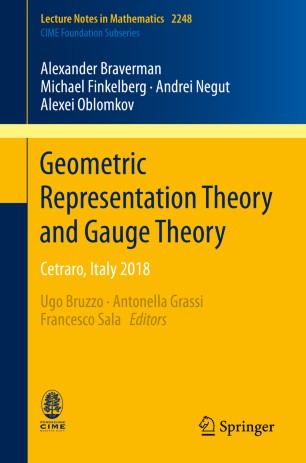 This book offers a review of the vibrant areas of geometric representation theory and gauge theory, which are characterized by a merging of traditional techniques in representation theory with the use of powerful tools from algebraic geometry, and with strong inputs from physics.   The notes are based on lectures delivered at the CIME school "Geometric Representation Theory and Gauge Theory" held in Cetraro, Italy, in June 2018. They comprise three contributions, due to Alexander Braverman and Michael Finkelberg, Andrei Negut, and Alexei Oblomkov, respectively. Braverman and Finkelberg’s notes review the mathematical theory of the Coulomb branch of 3D N=4 quantum gauge theories. The purpose of Negut’s notes is to study moduli spaces of sheaves on a surface, as well as Hecke correspondences between them. Oblomkov's notes concern matrix factorizations and knot homology. This book will appeal to both mathematicians and theoretical physicists and will be a source of inspiration for PhD students and researchers.