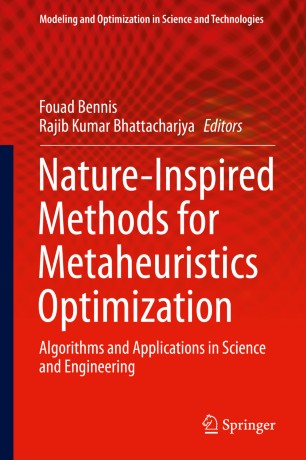 Algorithms and Applications in Science and Engineering

Part of the Modeling and Optimization in Science and Technologies book series (MOST, volume 16)

This book gathers together a set of chapters covering recent development in optimization methods that are inspired by nature. The first group of chapters describes in detail different meta-heuristic algorithms, and shows their applicability using some test or real-world problems. The second part of the book is especially focused on advanced applications and case studies. They span different engineering fields, including mechanical, electrical and civil engineering, and earth/environmental science, and covers topics such as robotics, water management, process optimization, among others. The book covers both basic concepts and advanced issues, offering a timely introduction to nature-inspired optimization method for newcomers and students, and a source of inspiration as well as important practical insights to engineers and researchers.

Professor Fouad Bennis is a Professor of Mechanical Engineering and Director of the International Relations Department at the Ecole Centrale de Nantes. He received his Engineering Master Degree (1987) and PhD in robotics (1991) from the same University. He has been awarded with the Order of Academic Palms as a Chevalier and as a Commandeur in 2007 and 2016, respectively. His research at the Laboratory of Digital Sciences of Nantes (LS2N), Ecole Centrale de Nantes, is covering Multi-Disciplinary Optimization, Product and Process design, and Digital Human Modeling. In particular, he is dealing with: analysis of mechanical tolerance, robust, fuzzy and collaborative design, and integration of virtual reality in working environments He has achieved important results in studying human performance using virtual reality. He has gained 30 years of teaching and research experience. He is author of 13 book chapters and more than 150 peer-reviewed scientific publications in a number of renowned international journals and conference proceedings.

Prof. Rajib Kumar Bhattacharjya is a Professor in the Department of Civil Engineering at the Indian Institute of Technology Guwahati, India. He received his Bachelor's and Master’s Degree in Civil Engineering from Gauhati University, India, in 1993 and 1995, respectively, and his Ph.D. in Civil Engineering from the Indian Institute of Technology Kanpur, India, in 2004. His research interests include classical and non-classical optimization methods, groundwater management, groundwater pollution control, and management of saltwater intrusion in coastal aquifers, as well as artificial neural networks and their applications in civil engineering. He has gained more than 20 years of teaching and research experience. He has authored more than 70 peer-reviewed scientific publications in renowned international journals and conference proceedings, and has served as a co-editor of  two recent books i.e. “Urban Hydrology, Watershed Management and Socio-Economic Aspects” and “Urban Ecology, Water Quality and Climate Change”, both published by Springer, in 2016 and 2018, respectively. At the Indian Institute of Technology Guwahati, he has taught courses on subsurface hydrology, hydrology, optimization methods, water resources planning and management, among others. He has also been a visiting professor at other institutes, including the Dalhousie University, in Halifax, Canada and the Ecole Centrale Nantes, in France.