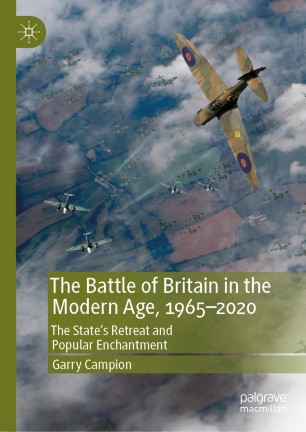 The State’s Retreat and Popular Enchantment

The Battle of Britain has held an enchanted place in British popular history and memory throughout the modern era. Its transition from history to heritage since 1965 confirms that the 1940 narrative shaped by the State has been sustained by historians, the media, popular culture, and through non-governmental heritage sites, often with financing from the National Lottery Heritage Lottery Fund. Garry Campion evaluates the Battle’s revered place in British society and its influence on national identity, considering its historiography and revisionism; the postwar lives of the Few, their leaders and memorialization; its depictions on screen and in commercial products; the RAF Museum’s Battle of Britain Hall; third-sector heritage attractions; and finally, fighter airfields, including RAF Hawkinge as a case study. A follow-up to Campion’s The Battle of Britain, 1945–1965 (Palgrave, 2015), this book offers an engaging, accessible study of the Battle’s afterlives in scholarship, memorialization, and popular culture.