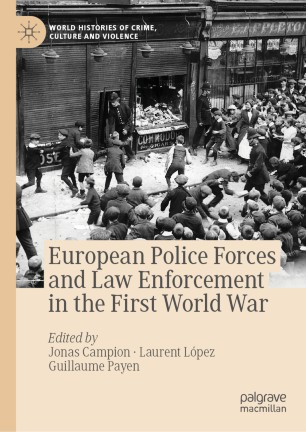 This book offers a global history of civilian, military and gendarmerie-style policing around the First World War. Whilst many aspects of the Great War have been revisited in light of the centenary, and in spite of the recent growth of modern policing history, the role and fate of police forces in the conflict has been largely forgotten. Yet the war affected all European and extra-European police forces. Despite their diversity, all were confronted with transnational factors and forms of disorder, and suffered generally from mass-conscription. During the conflict, societies and states were faced with a crisis situation of unprecedented magnitude with mass mechanised killing on the battle field, and starvation, occupation, destruction, and in some cases even revolution, on the home front. Based on a wide geographical and chronological scope – from the late nineteenth century to the interwar years – this collection of essays explores the policing of European belligerent countries, alongside their empires, and neutral countries. The book’s approach crosses traditional boundaries between neutral and belligerent nations, centres and peripheries, and frontline and rear areas. It focuses on the involvement and wartime transformations of these law-enforcement forces, thus highlighting underlying changes in police organisation, identity and practices across this period.