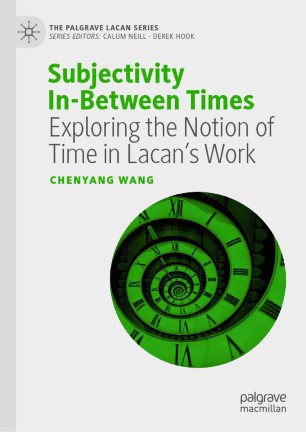 Exploring the Notion of Time in Lacan’s Work

“This new book on Lacan and time is an incisive and novel intervention in psychoanalytic studies. It offers a thorough and remarkably clear account of Lacan’s work from the perspective of temporalities. In so doing, it asks us to rethink much of Lacanian theory, especially the central idea of the Imaginary, Symbolic and Real, in ways that have important theoretical, clinical and political implications.”
—Stephen Frosh, Professor of Psychology, Department of Psychosocial Studies, Birkbeck College, University of London, UK.
“Chenyang Wang's masterpiece reminds us that time is for Lacan a logical category, not a category of our experience of reality. Time structures the processes of unconscious reasoning and identification: WHEN something is said or done determines the truth of what is said or is done. In these crazy times this lesson is crucial even for our political activity. So don't be too late, act now and read Wang's book!”
—Slavoj Žižek, Professor of Philosophy at the European Graduate School
This book is the first to systematically investigate how the notion of time is conceptualised in Jacques Lacan’s work. Through a careful examination of Lacan’s various presentations of time, Chenyang Wang argues that this notion is key to a comprehension of Lacan’s psychoanalytic thinking, and in particular to the way in which he theorises subjectivity. This book demonstrates that time is approached by Lacan not only as consciously experienced, but also as pre-reflectively embodied and symbolically generated. In an analysis that begins with Lacan’s “Logical Time” essay, Chenyang Wang articulates three temporal registers that correspond to Lacan's Real-Symbolic-Imaginary triad and also demonstrates how Lacan’s elaboration of other major themes including consciousness, body, language, desire and sexuality is informed by his original perspectives on time. Filling a significant gap in contemporary Lacanian studies, this book will provide essential reading for students and scholars of psychoanalytic theory, continental philosophy and critical theory.
Chenyang Wang is a researcher in the field of psychosocial studies. He completed his PhD thesis on Lacan and time at Birkbeck College, University of London, UK. His work focuses on the intersections between Lacanian psychoanalysis and social research.