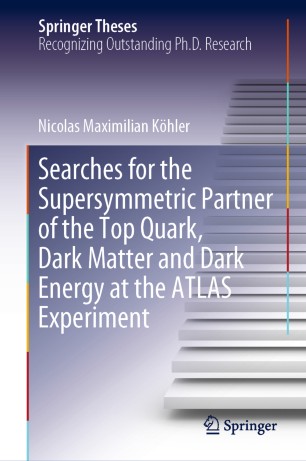 Searches for the Supersymmetric Partner of the Top Quark, Dark Matter and Dark Energy at the ATLAS Experiment

Astrophysical observations implying the existence of Dark Matter and Dark Energy, which are not described by the Standard Model (SM) of particle physics, have led to extensions of the SM predicting new particles that could be directly produced at the Large Hadron Collider (LHC) at CERN. Based on 2015 and 2016 ATLAS proton-proton collision data, this thesis presents searches for the supersymmetric partner of the top quark, for Dark Matter, and for DarkEnergy, in signatures with jets and missing transverse energy.

Muon detection is key to some of the most important LHC physics results, including the discovery of the Higgs boson and the measurement of its properties. The efficiency with which muons can be detected with the ATLAS detector is measured using Z boson decays. The performance of high-precision Monitored Drift Tube muon chambers under background rates similar to the ones expected for the High Luminosity-LHC is studied.