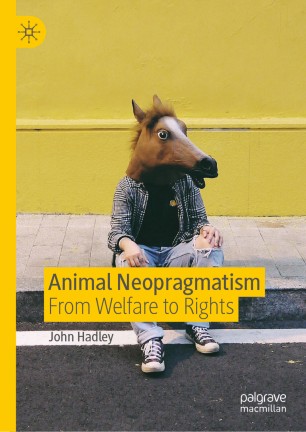 From Welfare to Rights

This book affords a neopragmatic theory of animal ethics, taking its lead from American Pragmatism to place language at the centre of philosophical analysis. Following a method traceable to Dewey, Wittgenstein and Rorty, Hadley argues that many enduring puzzles about human interactions with animals can be ‘dissolved’ by understanding why people use terms like dignity, respect, naturalness, and inherent value. Hadley shifts the debate about animal welfare and rights from its current focus upon contentious claims about value and animal mindedness, to the vocabulary people use to express their concern for the suffering and lives of animals. With its emphasis on public concern for animals, animal neopragmatism is a uniquely progressive and democratic theory of animal ethics.

John Hadley is a senior lecturer in philosophy in the School of Humanities and Communication Arts at Western Sydney University, Australia. He is the author of Animal Property Rights: A Theory of Habitat Rights for Wild Animals (2015), and co-editor, with Elisa Aaltola, of Animal Ethics and Philosophy: Questioning the Orthodoxy (2015).

“Hadley’s book offers a distinctly different and innovative animal ethics which goes beyond the, now rather stale, debate between exponents of rights and welfare. Through the utilisation of neopragmatism and an anti-representational analysis of language, he is able to show convincingly that the non-hedonistic rights vocabulary of dignity and respect can be tied to the more politically acceptable language of welfare. Hadley’s brilliantly conceived linguistic turn in animal ethics is therefore of considerable political significance.” (Robert W. Garner, Professor of Politics, University of Leicester, UK)

“The philosophical wit Sidney Morgenbesser quipped “Pragmatism is all very well in theory, but it doesn't work in practice.” In this accessible and engaging book, John Hadley demonstrates that pragmatism can be a genuine force for social and political change when theory and practice are brought into alignment. Hadley’s strategy is ameliorative working-from-within, using linguistic pragmatist tools to extend the folk notion of animal welfare to include difficult cases of pain-free but demeaning treatment of animals.” (David Macarthur, Associate Professor in Philosophy, University of Sydney, Australia)

“Animal ethics is dominated by moral realists. Until now, alternative perspectives have barely been represented, much less defended in book-length detail. Animal Neopragmatism is, therefore, a game changer. In this insightful and provocative volume, John Hadley sets out a powerful pragmatist theory about how to understand dignity, and rights-based objections to seemingly harmless ways of using animals. Going forward, all proponents of animal rights will need to grapple with Hadley’s arguments.” (Bob Fischer, Associate Professor of Philosophy, Texas State University, USA)

“Animal Neopragmatism is an engaging and accessible book presenting a novel theory of animal ethics. Using pragmatist philosophy—long overlooked by animal ethicists—Hadley reveals how both metalevel problems and linguistic analysis are of central relevance to even the most practical of moral and political questions about human-animal relationships. This is shown with both characteristic lucidity and philosophical acuity. Animal Neopragmatism deserves to be taken seriously by both animal ethicists and animal advocates.” (Josh Milburn, Associate Lecturer in Political Philosophy, University)