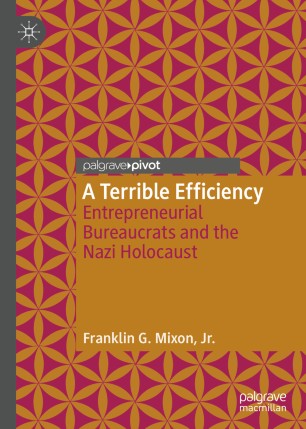 Entrepreneurial Bureaucrats and the Nazi Holocaust

This book provides numerous examples that apply the modern theory of bureaucracy developed in Breton and Wintrobe (1982 and 1986) to the Nazi Holocaust. More specifically, the book argues, as do Breton and Wintrobe (1986), that the subordinates in the Nazi bureaucracy were not “following orders” as they claimed during the war crimes trials at Nuremberg and elsewhere, but were instead exhibiting an entrepreneurial spirit in competing with one another in order to find the most efficient way of exacting the Final Solution. This involved engaging in a process of exchange with their superiors, wherein the subordinates offered the kinds of informal services that are not codified in formal contracts. In doing so, they were competing for the rewards, or informal payments not codified in formal contracts, that were conferred by those at the top of the bureaucracy. These came in the form of rapid promotion, perquisites (pecuniary and in-kind), and other awards. The types of exchanges described above are based on “trust,” not formal institutions.