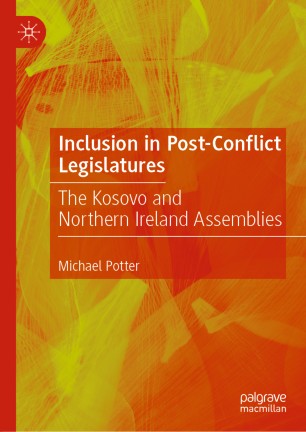 The Kosovo and Northern Ireland Assemblies

“An excellent analysis of the complex dynamics of inclusion in post-conflict societies: theoretically grounded, empirically rich, and with a well-informed set of policy-relevant insights and recommendations with implications far beyond the cases of Kosovo and Northern Ireland.”
Stefan Wolff, University of Birmingham, UK
“Does the promotion of political accommodation between the contending parties in an ethno-nationalist conflict disadvantage other groups in society?  This important question is at the heart of Michael Potter's nuanced study of post-settlement parliaments in Kosovo and Northern Ireland, in which he probes their record of representativeness, focusing on gender and ethnicity.  His meticulous research, drawing on extensive fieldwork, shows that the domination of the parliaments by parties aligned to the conflict does indeed tend to marginalise other identities. His findings provide plenty of food for thought for practitioners in the field of conflict resolution.”
Adrian Guelke, Queen’s University Belfast, UK
“Identity is a central organising principle of politics in the 21st century. In this impressive book Michael Potter shows that a focus on gender and minority ethnic identities in newly-formed post-conflict assemblies provides a unique litmus test of the robustness of democratic politics. He analyses the cases of Kosovo and Northern Ireland with rigour and considerable insight. This book makes a highly original and lasting contribution to theory and practice in post-conflict settings world-wide.”
Yvonne Galligan, Dublin Institute of Technology, Ireland
This book examines inclusion in post-conflict legislatures, using Northern Ireland and Kosovo as case studies and gender and minority ethnicity as indicators. The analysis uses an adapted framework developed by Yvonne Galligan and Sara Clavero to measure inclusion across a range of factors associated with deliberative democratic principles. The logic is that political systems designed to accommodate communities in conflict will prioritise certain identities over others. The aim of the book is to investigate how identities not directly associated with a conflict fare in a political system designed to manage identities in conflict.
Michael Potter is Visiting Research Fellow at Queen’s University Belfast, UK.