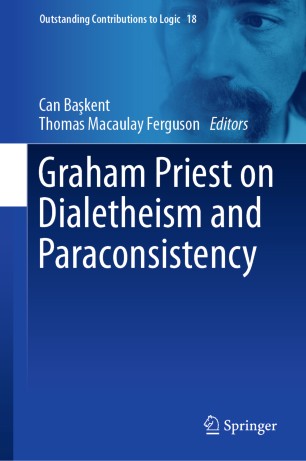 Graham Priest on Dialetheism and Paraconsistency

This book presents the state of the art in the fields of formal logic pioneered by Graham Priest. It includes advanced technical work on the model and proof theories of paraconsistent logic, in contributions from top scholars in the field. Graham Priest’s research has had a considerable influence on the field of philosophical logic, especially with respect to the themes of dialetheism—the thesis that there exist true but inconsistent sentences—and paraconsistency—an account of deduction in which contradictory premises do not entail the truth of arbitrary sentences. Priest’s work has regularly challenged researchers to reappraise many assumptions about rationality, ontology, and truth.

This book collects original research by some of the most esteemed scholars working in philosophical logic, whose contributions explore and appraise Priest’s work on logical approaches to problems in philosophy, linguistics, computation, and mathematics. They provide fresh analyses, critiques, and applications of Priest’s work and attest to its continued relevance and topicality. The book also includes Priest’s responses to the contributors, providing a further layer to the development of these themes

Can Başkent received his Ph.D. from the City University of New York in 2012. He subsequently worked as a postdoctoral researcher at IHPST, Paris, and INRIA and the University of Bath. His research interests include modal and non-classical logics and foundations of game theory.
Thomas Macaulay Ferguson received his Ph.D. from the City University of New York Graduate Center in 2017 and is currently an ontologist for the Cyc artificial intelligence project and affiliated research scholar at the Saul Kripke Center. His research interests include model theory, paraconsistent logic, and formal epistemology. He is the author of Meaning and Proscription in Formal Logic (Springer) and the Oxford University Press’s Dictionary of Logic (with Graham Priest). His research has appeared e.g. in the Journal of Philosophical Logic, the Notre Dame Journal of Formal Logic, Studia Logica, the Journal of Logic and Computation, and Synthese.