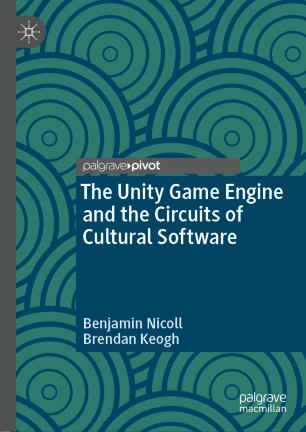 The Unity Game Engine and the Circuits of Cultural Software

Videogames were once made with a vast range of tools and technologies, but in recent years a small number of commercially available 'game engines' have reached an unprecedented level of dominance in the global videogame industry. In particular, the Unity game engine has penetrated all scales of videogame development, from the large studio to the hobbyist bedroom, such that over half of all new videogames are reportedly being made with Unity. This book provides an urgently needed critical analysis of Unity as ‘cultural software’ that facilitates particular production workflows, design methodologies, and software literacies. Building on long-standing methods in media and cultural studies, and drawing on interviews with a range of videogame developers, Benjamin Nicoll and Brendan Keogh argue that Unity deploys a discourse of democratization to draw users into its ‘circuits of cultural software’. For scholars of media production, software culture, and platform studies, this book provides a framework and language to better articulate the increasingly dominant role of software tools in cultural production. For videogame developers, educators, and students, it provides critical and historical grounding for a tool that is widely used yet rarely analysed from a cultural angle.

Benjamin Nicoll is Lecturer in Digital Media and Communication and a member of the Digital Media Research Centre at Queensland University of Technology, Australia. His research focuses on the history and critical theory of videogames and videogame platforms. He is the author of Minor Platforms in Videogame History (2019).

Brendan Keogh is an Australian Research Council Fellow in the Digital Media Research Centre at Queensland University of Technology, Australia. His research focuses on the experiences, skills, and innovations of videogame makers, as well as broader investigations into videogame culture. He is the author of A Play of Bodies: How We Perceive Videogames (2018) and Killing is Harmless: A Critical Reading of Spec Ops The Line (2012).

“Readers should be aware that this is a specialized book; it is neither a tutorial nor general reference for the Unity game engine. It will be most useful to educators and researchers interested in the interleaving of game development and cultural impact.” (Ghita Kouadri, Computing Reviews, February 9, 2021)