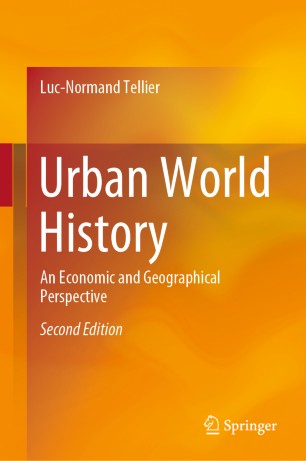 An Economic and Geographical Perspective

This book seeks to deepen readers’ understanding of world history by investigating urbanization and the evolution of urban systems, as well as the urban world, from the perspective of historical analysis. The theoretical framework of the approach stems directly from space-economy, and, more generally, from location theory and the theory of urban systems.
The author explores a certain logic to be found in world history, and argues that this logic is spatial (in terms of spatial inertia, spatial trends, attractive and repulsive forces, vector fields, etc.) rather than geographical (in terms of climate, precipitation, hydrography). Accordingly, the book puts forward a truly original vision of urban world history, one that will benefit economists, historians, regional scientists, and anyone with a healthy curiosity.

Luc-Normand Tellier obtained a Ph.D. in Regional Science from the University of Pennsylvania in 1973. He founded the Department of Urban Studies and Tourism of the University of Quebec at Montreal in 1976. He is the author of numerous books in regional science, as well as in French and Canadian history, and he has published in international journals such as the Journal of Regional Science, Regional Science Policy and Practice, Geographical Analysis, and Environment and Planning A. He received the title of Professor Emeritus in 2012.