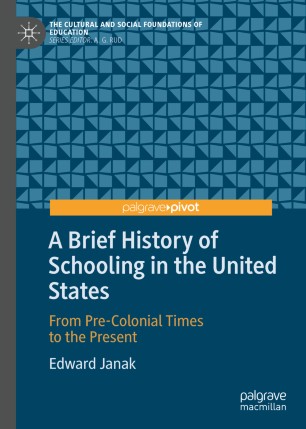 A Brief History of Schooling in the United States

From Pre-Colonial Times to the Present

“Janak offers a pithy, fast-paced, and often humorous introduction to the history of education. In this one-of-a-kind account, he invitingly guides readers through some of the field's challenging terrain while piquing interest in learning more.”
—Jackie M. Blount, Professor of Educational Studies, Ohio State University, USA

“This book’s regular consideration of philosophical roots highlights the power of ideas in informing educational practice and reform in a given era, and its attention to legacies from the various historical episodes discussed encourages readers to view these developments as relevant antecedents to enduring educational problems.”
—Sevan G. Terzian, Professor, University of Florida, USA

“This meaningful and concise work acknowledges distinctions within Eurocentric frameworks, while recognizing the valuable and diverse educational structures of indigenous peoples. Altogether a memorable introduction to education in the United States.”
—Benjamin A. Johnson, Associate Professor, Utah Valley University, USA

This book presents a sweeping overview of the historical and philosophical foundations of schooling in the United States. Beginning with education among the indigenous peoples of the Americas and going on to explore European models of schooling brought into the United States by European colonists, the author carefully traces the arc of educational reform through major episodes of the nation’s history. In doing so, Janak establishes links between schools, politics, and society to help readers understand the forces impacting educational policy from its earliest conception to the modern day. Chapters focus on the philosophical, political, and social concepts that shaped schooling of dominant and subcultures in the United States in each period. Far from being merely concerned with theoretical foundations, each chapter also presents a snapshot of the “nuts and bolts” of schooling during each period, examining issues such as pedagogical devices, physical plants, curricular decisions, and funding patterns.

Edward Janak is Associate Professor in the Department of Educational Foundations and Leadership at the University of Toledo, USA. He is also the author of Politics, Disability, and Education Reform in the South: The Work of John Eldred Swearingen (2014).