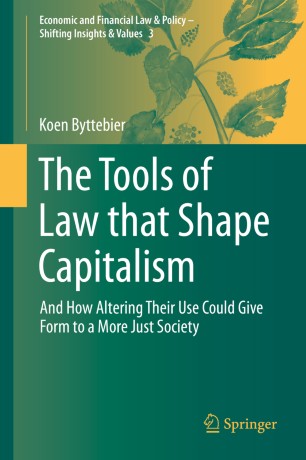 The Tools of Law that Shape Capitalism

The book provides a critical analysis of the legal mechanisms that help shape the capitalist system, and also makes proposals for deploying these tools in a different manner. Although often disguised in difficult legal jargon, in reality the main legal building blocks of the prevailing capitalist socio-economic system are simple, the most important being: (1) money; (2) the company form and (3) (neo)liberal state organization aimed at making markets as free as possible for the entrepreneurial sector. Having been used to create the socio-economic order over 2-3 centuries, the legal systems that helped shape capitalist societies around the globe have also contributed to a variety of fundamental problems that remain unaddressed by the capitalist system itself, such as ever-mounting public and private debt, pollution and climate change, an increasing polarization between rich and poor and a globally unjust fiscal order. By proposing alternative uses for the tools of law that shape capitalism, the book also makes proposals for dealing with these matters.