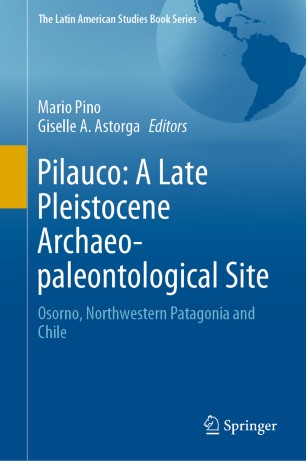 This volume combines 10 years of accomplished research at the Pilauco site. The studies are focused on a variety of scientific areas including geological, sedimentological, geomorphological and paleobotanical topics, as well as paleontology of vertebrata and invertebrata, micropaleontology, archaeology, biochemistry, taxonomy, taphonomy, astrophysics  and the development of some particular touristic aspects. In 18 chapters a variety of authors describe the excavation and investigation of this unique location.

The book presents Pilauco as an example for the natural laboratory which can be found in South America, a testing ground for many of the hypotheses regarding migrations of animals and humans. In this context the study of topics, such as the paleozoography, the role of megafauna species for the architecture of the forests, the animal extinctions or the early human settlements, is extremely important on a global scale.

The Pilauco site features paleontological and archaeological evidences and is contemporaneous with the Monte Verde site (~ 15,000 cal. yr AP). It is located 100 km north from Monte Verde and lies within the Intermediate Depression in northwestern Chilean Patagonia. It was discovered by chance in 1986 and has been excavated and investigated since 2007.