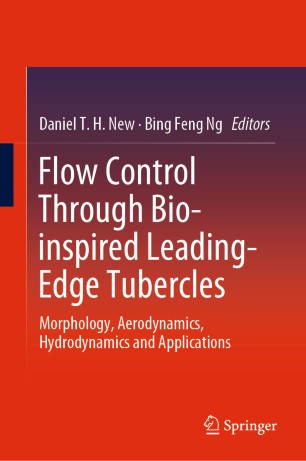 This book describes and explains the basis of bio-inspired, leading-edge tubercles based on humpback whale flippers as passive but effective flow control devices, as well as providing a comprehensive practical guide in their applications.  It first discusses the morphology of the humpback whale flipper from a biological perspective, before presenting detailed experimental and numerical findings from past investigations by various experts on the benefits of leading-edge tubercles and their engineering implementations.

Leading-edge tubercle designs and functions have attracted considerable interest from researchers in terms of understanding their role in the underwater agility of these whales, and to exploit their flow dynamics in the development of new and novel engineering solutions.  Extensive research over the past recent years has demonstrated that the maneuverability of these whales is at least in part due to the leading-edge tubercles acting as passive flow control devices to delay stall and increase lift in the post-stall regime.  In addition to the inherent benefits in terms of aerodynamics and hydrodynamics, investigations into leading-edge tubercles have also broadened into areas of noise attenuation, stability and industrial applications.

This book touches upon these areas, with an emphasis upon the effects of lifting-surface types, flow regimes, tubercle geometries, lifting-surface stability and potential industrial applications, among others.  As such, it features contributions from key experts in the fields of biology, physics and engineering who have conducted significant studies into understanding the various aspects of leading-edge tubercles.  Given the broad coverage and in-depth analysis, this book will benefit academic researchers, practicing engineers and graduate students interested in tapping into such a unique but highly functional flow control strategy.

Daniel T. H. New obtained his B.Eng. (Hons) and Ph.D. degrees from the National University of Singapore in 1998 and 2004 respectively.  Between 2001 and 2005, he conducted research on jet-mixing enhancement and control strategies, drag reduction and propulsion techniques at Temasek Laboratories, National University of Singapore as an Associate Scientist and subsequently, Research Scientist.  He joined the University of Liverpool, United Kingdom, as a Lecturer in 2005 where he investigated the flow physics of single and coaxial nozzle jet flows with trailing-edge modifications with the support of UK Engineering and Physical Sciences Research Council and The Royal Society.  He returned to Singapore in 2010 to join Nanyang Technological University, Singapore where he is currently an Associate Professor focusing on research associated with aerodynamics, supersonic flows, propulsion, hydrodynamics, marine engineering, vortex-ring and jet flow control, among others.

B. F. Ng received his B.Eng. degree in Aerospace Engineering with First-class Honours from Nanyang Technological University, Singapore (NTU) and his Ph.D. degree from Imperial College London under the sponsorship of the Singapore National Research Foundation Energy Innovation Programme Office. Since 2015, he is with the School of Mechanical and Aerospace Engineering in NTU with research interest in fluids and structures as well as their interactions. Key focus areas involve the study of fluid mechanics to achieve energy and environment sustainability in aerospace, marine and building applications, as well as structural dynamics to fundamentally investigate energy savings that can be derived from lightweight and topologically optimised structures with specific applications in rotary systems (including helicopters, wind turbines, UAV, among others).