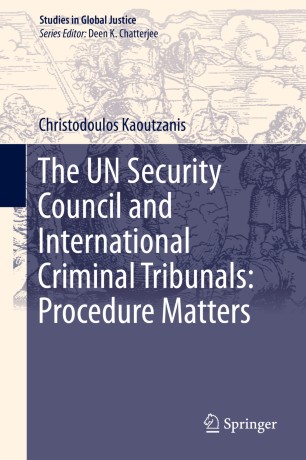 The book explains why and how the UN Security Council authorizes international criminal investigations into mass atrocities. In doing so, it tackles head-on the obvious double standards of global justice, where few atrocities get investigated and most slip below the headlines.
The book argues that the Council’s decision-making procedure is central to understanding the Council’s decisions. This procedure is broken into three distinct steps, namely the role of diplomats at the Council, the Council’s reliance on third parties and the Council’s resort to precedent. The volume documents that the Council authorized international criminal investigations only into the handful of mass atrocities for which the Council’s deliberations successfully completed each of these three steps.
Written for both scholars and practitioners, the book combines insights from the fields of international relations, international law and human rights. Through archival research and interviews with UNSC diplomats who took part in deliberations on atrocities, the volume presents evidence that supports its argument across cases and across time. In doing so, the book avoids the yes/no (or 0 vs 1) tendency of many social science projects, thereby acknowledging that there is no silver bullet to explain the work of the Council’s five permanent and ten elected members.

Chris Kaoutzanis's Procedure Matters is a deep dive into how the UN Security Council actually works in dealing with some of the world's worst atrocities.  Showing that UN procedure does matter, Kaoutzanis illuminates the limited accountability for international crimes that can be expected from that vital institution.  As importantly, he offers a road map for how to use UN legitimating procedures to navigate the power politics of that august body.  This is a map no scholar of international institutions and no human rights activist should be without.

This project recognizes what the scholarly literature has generally ignored or deemphasized: the central role of the Security Council in responding to mass atrocity situations. As much as international lawyers would hate to admit it, the legal response to international crimes is initially controlled not by international judges and tribunals, but rather by the Security Council and its geo-political and diplomatic complications. Kaoutzanis has put the sun back at the center of our solar system.

His academic focus is placed on the intersection of international law and international relations, with a focus on the reactions of the United Nations Security Council to mass atrocities. His publications also examine issues of international criminal justice. Among his experiences, Kaoutzanis was a summer intern at the Office of the Co-Investigating Judges, at the Extraordinary Chambers of the Courts of Cambodia. He speaks Greek, English and French.