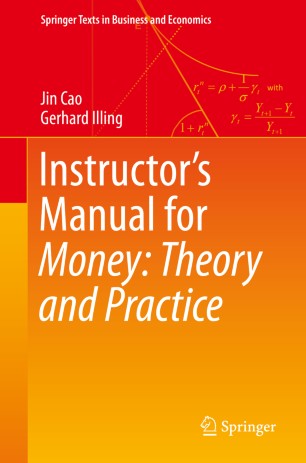 This instructor’s manual complements the textbook “Money: Theory and Practice," which provides an introduction to modern monetary economics for advanced undergraduates, highlighting the lessons learned from the recent financial crisis. The manual provides teachers with exercises and examples that reflect both the core New Keynesian model and recent advances, taking into account financial frictions, and discusses recent research on an intuitive level based on simple static and two-period models.

Jin Cao is a research economist in Norges Bank, the Central Bank of Norway. He holds a PhD in economics from Ludwig Maximilians University of Munich, Germany. His research focuses on banking and finance, monetary economics, economics and institutions.

Gerhard Illing holds the chair in macroeconomics at the Ludwig Maximilian University in Munich, Germany. Previously, he was Professor at the University of Bamberg, Germany from 1993 -1995 and at the Goethe University Frankfurt, Germany from 1995 - 2001. His research focuses on monetary theory, financial stability, systemic risk and lender of last resort policy. He has written several books on macroeconomics, monetary theory and game theory.