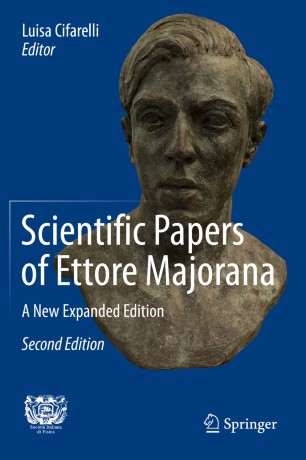 This book presents in full the work of the Italian theoretical physicist Ettore Majorana and explains its impacts, which are still being felt.  It opens with a contribution by A. Zichichi that considers in depth the scientific genius of Majorana. This introductory chapter is followed, in chronological order, by the eleven scientific papers by this great scientist, in most cases translated into English for the first time. Each paper is accompanied by a comment from an expert in the field in question. Although very few in number, Majorana's papers constitute a heritage of undeniable value and extraordinary scientific meaning, since they laid the foundations for research fields that remain topical today. With this in mind, two additional contributions on ongoing developments in these research fields are included: one on neutrino physics and the other on Majorana fermions in condensed matter. The volume closes with a note on Majorana's life until his ill-fated disappearance.

Born in Rome in 1952, Luisa Cifarelli graduated with a degree in Physics in Bologna in 1975. First an INFN researcher in Bologna and fellow at CERN (Geneva), she began her university career in 1988, being appointed Chair of Physics in 1991. She has since taught at several Italian Universities (Naples, Pisa and Salerno) and is now a Professor of Experimental Physics in Bologna. Her research has chiefly focused on very high energy nuclear and subnuclear physics, conducted in the context of international collaborative experiments at major European laboratories, such as CERN and DESY (Hamburg). In the last ten years she has been involved in the design, construction and running of the large ALICE experiment at the CERN LHC for the study of heavy nuclei collisions at extreme, unprecedented energies. She has served on several councils, committees and commissions, including the CERN Council and the INFN Board of Directors. President of the Italian Physical Society since 2008, she was also President of the European Physical Society from 2011 to 2013. She is a Fellow of the Institute of Physics, a member of the Academia Europaea and a member of the Committee on International Scientific Affairs of the American Physical Society. She is a member of the Scientific Committee of the "Ettore Majorana" Foundation and Centre for Scientific Culture (Erice), and of the Scientific Council of JINR (Dubna). She is President of the "Enrico Fermi" Historical Museum of Physics and Centre for Study and Research (Rome).